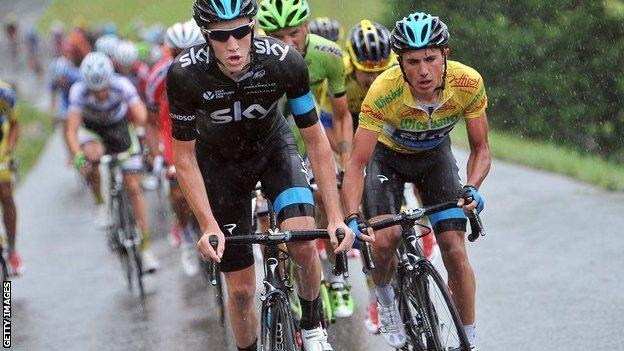 Britain's Peter Kennaugh has held on to the yellow jersey at the Tour of Austria for a fourth consecutive day.

The Isle of Man cyclist, 25, finished the fifth stage in seventh to retain his 29-second advantage over Italian Damiano Caruso (Cannondale).

Jesse Sergent attacked out of the breakaway in the closing kilometres to claim his first win of the season in the tricky weather conditions.

"Our guys were really keen on doing the job for Pete and we still had a couple of guys pulling for him in the last couple of kilometres.

"We controlled the pace from 60km out and Christian Knees, Sebastian Henao and Ian Boswell were still with Pete at the end."

He will represent the island in both road and track events at the Commonwealth Games in Glasgow later this month.