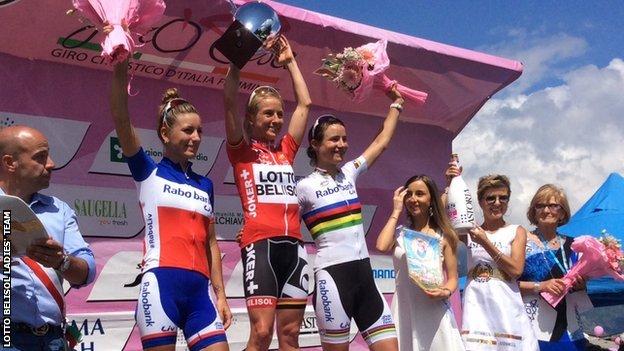 Britain's Emma Pooley won the final stage of the Giro Rosa for her third victory in this year's race.

Pooley, 31, finished 25 seconds ahead of Pauline Ferrand-Prevot in the summit finish at Magreglio after climbing the famous Madonna del Ghisallo.

Marianne Vos, of the Netherlands, finished in the same time as Rabo Liv team-mate Ferrand-Prevot to take the pink jersey as the winner of the general classification.

It was her third victory in four years.

Pooley, who won stage six and eight, claimed the mountains classification. She said those victories had given her "more confidence on the climbs" and praised her "fantastic team-mates" for their positional work.

She said: "Taking this green jersey is really great for the team, to be on that final podium, it's a big honour.

"I feel like we earned it after all the hard work. I had such great support of the team, they really believed in me."

Pooley, who won a silver medal at the 2008 Olympics, will compete for England at the Commonwealth Games in Glasgow before lining up for the women's La Course on the final day of the Tour de France on 27 July.

She is part of a pressure group called La Tour Entier, which has campaigned for the reintroduction of a women's Tour de France after the race was cancelled in 2009 because of a lack of sponsorship and media coverage.

This year the women will compete on the same day as the men but while the men's is an 85-mile stage the women's is a criterium-style event which will see them race laps round a short circuit through the centre of Paris. La Tour Entier's ultimate goal is for a stage race to be run alongside the men's race.