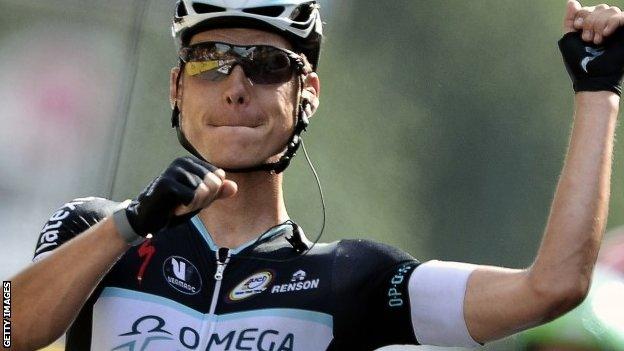 Tony Martin raced to a solo victory on stage nine of the Tour de France as Tony Gallopin took over the race lead.

Germany's three-time world time trial champion Martin was in an early break with Alessandro di Marchi but rode clear 50km from the finish in Mulhouse.

France's Gallopin finished in a group two minutes, 45 seconds back to take the yellow jersey from Vincenzo Nibali, who had led since winning stage two.

Nibali finished eight minutes behind Martin with the other race favourites.

Once the early breakaway had been allowed to go clear, Nibali's Astana team were content to let Martin and Di Marchi build up an advantage of more than six minutes as they went up and down a couple of category two and category three climbs in the first half of the stage.

Martin made his move on the next ascent, the category one 10.8km climb up Le Markstein, and continued his attack over the shorter slopes of Grand Ballon as the stage reached its peak at 1,336m above sea level.

The Omega Pharma - Quick-Step rider then used his time-trialling skills to good effect on the 20km descent before maintaining his form on the 20km run-in to the finish.

"I'm happy I could make my own time trial," Martin told BBC Sport.

"I felt good in the hills on Saturday so I took my chance today. I wasn't really suffering at the end and I had the power to go fast so I'm happy with my performance.

"The victory is one of the biggest of my career."

Behind Martin, Gallopin, who started the stage three minutes, 27 seconds behind race leader Nibali managed to break clear of the peloton and form a group of 28 riders.

They built up an advantage of more than five minutes over Nibali's group putting the Lotto-Belisol rider in the virtual yellow jersey on the road.

Nibali's Astana team were unfazed and seemed content to let Gallopin stay clear and take the yellow jersey and the pressures that come with it.

The Italian finished alongside Alberto Contador of the Tinkoff-Saxo team, Richie Porte of Team Sky and Movistar's Alejandro Valverde as the main rivals for the overall race victory conserved energy ahead of the bigger battles to come.

The result means Gallopin will wear the yellow jersey on Monday's Bastille Day stage - a mountainous race that features four category one climbs and finishes atop the tough climb to La Planche des Belles Filles.

"To be in the yellow jersey on the national day in France is unbelievable and I will try to enjoy it," Gallopin told BBC Sport.