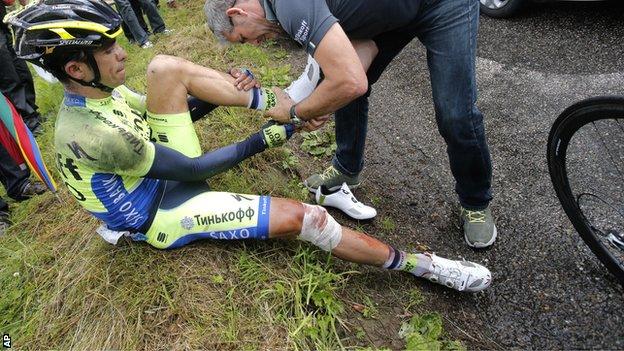 Alberto Contador says he has been told it is "almost impossible" for him to compete in the Vuelta a Espana after breaking a leg on the Tour de France.

The Spaniard, one of the pre-race favourites for Le Tour, withdrew on Stage 10 following a big crash.

Contador, 31, said he did not need surgery on his right leg but added doctors had virtually ruled him out of the Vuelta, an event he has won twice.

The Vuelta is due to start in Jerez de la Frontera on 23 August.

"The doctor told me that surgery would increase the trauma the knee has suffered and will increase the delay in recovery," added Contador.

"The good news is I have not damaged tendons or ligaments."