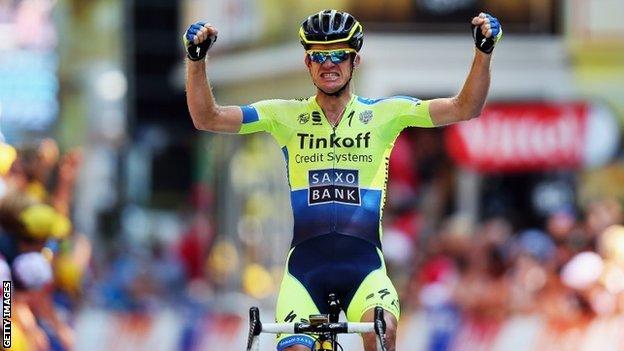 Australian Michael Rogers took victory in stage 16 of the Tour de France - the longest of this year's race.

The 34-year-old Tinkoff-Saxo rider made a break on the descent four kilometres out of the 237.5km Carcassonne to Bagneres-de-Luchon route.

It was his first stage victory on the Tour and followed his two stage wins at the Giro d'Italia earlier this year.

Vincenzo Nibali, the yellow jersey holder, and Alejandro Valverde, who is second overall, crossed the line together about nine minutes down on the leaders and retain the top two spots in the general classification.

But there was a reshuffling of the pack behind them as Frenchman Thibaut Pinot jumped to third place 29 seconds adrift, with compatriots Jean-Christophe Peraud and Romain Bardet in fourth and fifth respectively.

Rogers and Voeckler, who had Europcar team-mate Cyril Gautier for company in the closing stages, were part of a 21-man breakaway which took shape in three waves from 28km, and they were 12 minutes clear by the time they reached Port de Bales - 35km from the finishing line.

But the Australian, cleared of wrongdoing in April after a positive test for clenbuterol, made his move and it proved decisive to prevent Voeckler from extending his unbeaten run at Bagneres-de-Luchon.

Rogers said: "I know I've changed upstairs, I'm more hungry and opportunities seem clearer to me now. I'm not scared of the outcome now. Previously I was scared to try something new because I was scared of failure.

"I tried so hard to win a stage of the Tour before but this year, I've changed mentally. When it rains it pours, doesn't it?

"I knew once I got to the bottom of the last climb, the race had began for me. I tried a few times to drop them on the climb but I couldn't so I knew I had to pick them off on the descent. I said to myself - 'I have been in this position too many times and not won. I'm not going to do it again'."