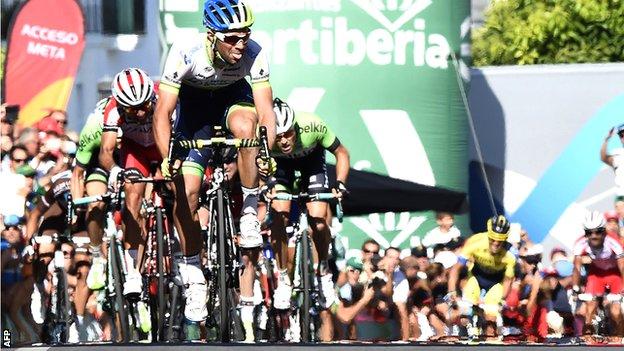 Australian Michael Matthews claimed the leader's jersey after pipping Irishman Dan Martin in a sprint finish to win the third stage of the Vuelta a Espana.

Matthews won the 197km race to Arcos de la Frontera and boosted by a 10-second time bonus, he took the red jersey from 2009 winner Alejandro Valverde.

Race favourite Nairo Quintana is four seconds back while Britain's Chris Froome is 23 seconds off the lead.

Former Tour de France champion Froome was in the chasing pack with Contador and clocked the same time as Matthews for the stage, finishing 10th.

Giro d'Italia winner Quintana also finished in the group with Froome and Contador to leapfrog his team-mate Valverde who lost seven seconds to slip to third overall.

Katusha's Giampaolo Caruso made his first move in the closing stages and opened up a small gap but, as the Italian faded, he was overtaken by Martin.

Martin could not hold on to his lead either, though, and he was passed on the finishing straight by Matthews, who crossed the line around a bike's length ahead in five hours, 12 minutes and 14 seconds for a third stage victory on the Vuelta, having won two last year.

Joaquim Rodriguez was third on the day, ahead of Wilco Kelderman and Paul Martens.

Tuesday's fourth stage is a 164.7km race from Mairena del Alcor to Cordoba.