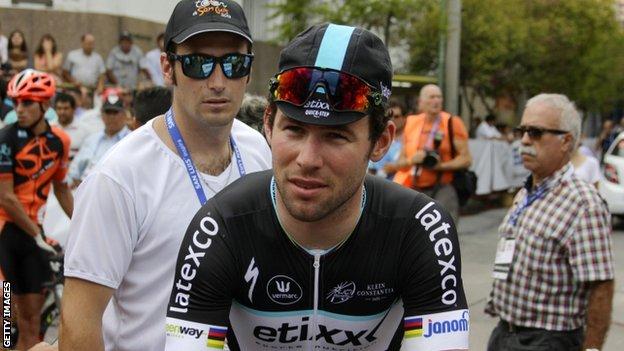 Mark Cavendish was beaten into second place in his opening race of 2015 at the Tour de San Luis in Argentina.

The Isle of Man rider was outsprinted by Colombia's Fernando Gaviria despite his team-mates "doing a perfect job" in pacing him to within sight of the line.

"I am disappointed that I was unable to pay them back for their work," added the Etixx - Quick-Step rider, 29.

"Gaviria got the jump and deserved the win. I didn't see the 200m to go sign. I knew I had to go but I was too late."

Cavendish's five team-mates had ridden on the front of the peloton to close down a breakaway attempt in the final 15km of the 186.8km race from San Luis to Villa Mercedes.

But 20-year-old Gaviria surprised everyone as he collected his first professional victory, with Italy's Sacha Modolo finishing third behind Cavendish.

Stage two of the week-long event is a 185.3km race from La Punta to Mirador del Portero which concludes with an uphill finish of 4.8km at 6.7% average gradient.