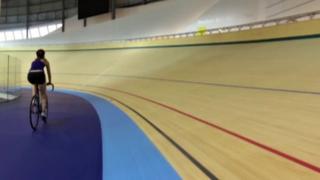 The £31m facility, one of only five velodromes of a similar standard in the UK, officially opens to the public on Friday afternoon.

Paralympian Dame Sarah Storey, gold medal-winning Olympian Dani King and British cycling guru Sir Dave Brailsford will be there on Thursday to promote the new facility at Pride Park, which also has a gym and multi-sports area.