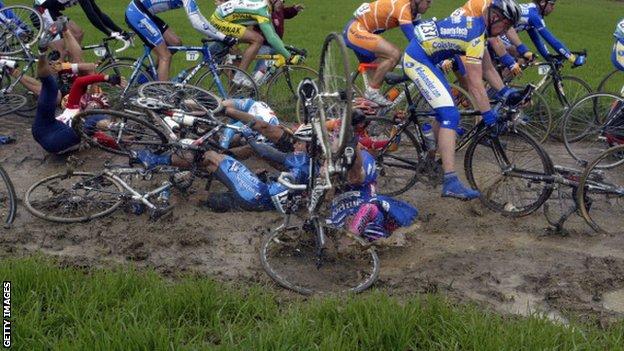 The arrival of spring across Europe heralded the annual series of tough and lengthy one-day 'Classics' - races which pit riders against uneven roads and unpredictable weather.

From a near-300km race across northern Italy, to the mud and cobbles of northern France and the oldest of all in Belgium, the Spring Classics are among the hardest races a professional cyclist face.

In a nutshell: Britain's Geraint Thomas goes for a solo victory on the Poggio but is caught as he reaches the summit and the sprinters take over in the final kilometre. Defending champion Alexander Kristoff leads out the sprint but Degenkolb edges it on the line.

In a nutshell: The 28-year-old makes an audacious attack with 40km to go and only Zdenek Stybar of the Czech Republic keeps pace. Peter Sagan catches up but Thomas drops them both with just over 4km left to prevail by 25 seconds.

In a nutshell: The 38-year-old wins the 239km event in wet and windy conditions, attacking with just under 6km to go and distancing himself from the chasing group of five riders to take victory. Dutch rider Niki Terpstra is second with Geraint Thomas recovering to finish third after being blown into a ditch by a gust of wind.

In a nutshell: The 27-year-old follows Etixx-Quick Step's Niki Terpstra on an attack 25km from the finish and holds off the Dutchman in a sprint finish. Belgian Greg van Avermaet is third, with Britain's Geraint Thomas 14th. Trek's Jesse Sergent and FDJ's Sebastien Chavanel are both knocked off their bikes by team cars.

In a nutshell: In his last race for Team Sky, Sir Bradley Wiggins attacks hard in the final 40km, but can not stay clear of the peloton. Instead John Degenkolb rides a shrewd race, timing his sprint to perfection in the velodrome, to secure Germany's first victory in the race since 1896. Luke Rowe is the best placed Briton in eighth as Welshman Geraint Thomas fails to finish.

In a nutshell: As always, the race of 34 climbs comes down to the final ascent of the Cauberg. Three-time winner Philippe Gilbert attacks on the 1,200m climb and races clear with Michael Matthews. But the pair are caught in the final kilometre and Kwiatkowski wins the small bunch sprint.

In a nutshell: Belgian Tim Wellens makes a break for the finish but is caught by the peloton and defending champion Valverde is the strongest on the third and final ascent of the formidable Mur de Huy. Britain's Chris Froome is involved in a crash 11km from the finish, although he gets back on his bike and finishes.

In a nutshell: Valverde wins for the third time in his career with a well-timed attack, clinching the Ardennes double after his midweek victory in the Wallonne Arrow.