The 215km race, one of the hardest on the professional circuit, is a warm-up for the Tour of Flanders on 5 April.

"I thought if I could surprise them a bit early I might be able to get away," the Welshman told Belgian TV.

The E3 Harelbeke is one of eight one-day races - or 'cobbled classics' - between late February and mid-April and Great Britain riders have now won three of the first four.

"I can't really believe it to be honest," Thomas said. "I just imagined I was trying to hold on to [GB track cycling team-mate] Ed Clancy's wheel in a team pursuit. 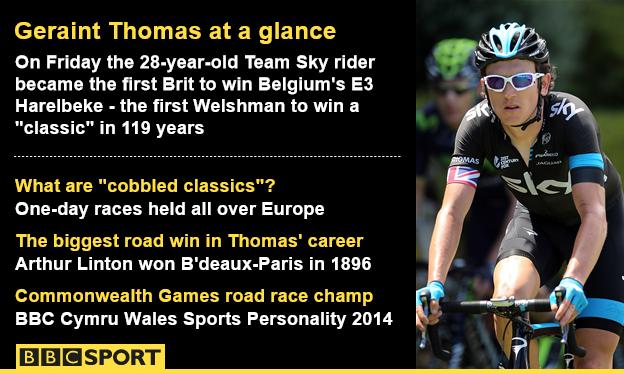 "[Stybar and Sagan] were blowing a bit, but I wasn't sure if they were bluffing. I'm just delighted to win this one and anything else is a bonus now."

Thomas will now go to the Tour of Flanders as a real contender for Team Sky's first win in a "Monument" - cycling's five biggest one-day races.

The Flemish epic is now wide open after Swiss star Fabian Cancellara crashed out of the E3 Harelbeke. He joined fellow three-time champion Tom Boonen on the casualty list after the Belgian was injured in the Paris-Nice stage race earlier this month.