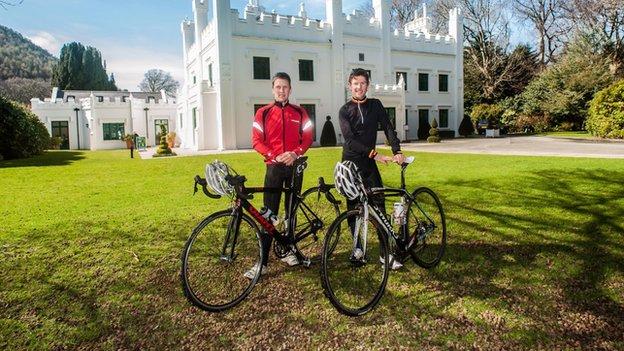 Cyclists Andrew Roche and Rob Holden have been named as official ambassadors for a new three-day cycling festival in the Isle of Man.

Both Roche and Holden have competed at a professional level and are heavily involved in the Manx cycling team.

Organiser Paul Phillips said their "knowledge and experience will help us to create a great series of races".

Cyclefest, scheduled for May 2016, will see professional cycling return to the island for the first time in 13 years.

The festival will include the opening stage of the Pearl Izumi Tour, which features the UK's leading professional teams.

Two-time British Criterium Champion Holden said: "The Isle of Man is a real hotbed of cycling talent with great roads and routes and stunning scenery.

"It has been crying out for a cycling event of this size, scale and quality that appeals to both residents and visitors.

"It will be a great chance for people from off island to experience everything that the Isle of Man has to offer to cyclists."

Seven-time Commonwealth Games competitor Roche added: "Our aim is to create a festival that appeals to cyclists of all levels and abilities."

This year, including household names such as Mark Cavendish and Peter Kennaugh, eight Manx cyclists were selected for the Great Britain Olympic Development squad.