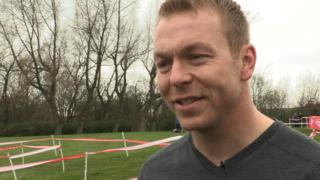 Wiggins is a machine - Hoy

Six-time Olympic champion Sir Chris Hoy describes Sir Bradley Wiggins as a "machine" after the Londoner announces he will attempt to break the world hour record at London's Olympic velodrome on Sunday 7 June.

"A test of suffering" is the Scot's description of the event that reigning world time trial champion Wiggins will attempt.

The current record of 52.4km (32.5 miles) was set by Australian rider Rohan Dennis earlier this year - Britain's Alex Dowsett will make his bid at the Manchester velodrome on 2 May.

Hoy was speaking at an event to encourage children to take up cycling.

'Special night' as Arsenal win in front of fans