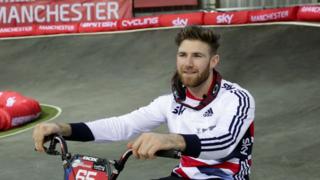 Watch Britain's Liam Phillips' "mind-blowing" win in the opening round of the 2015 UCI BMX Supercross World Cup series in Manchester.

The 2014 World Cup winner "had to make changes" to his winter training buts feels as "strong as I've ever been" as he won the elite final with a time of 28.602 seconds.