The Isle of Man has lost out to Stockton-on-Tees in its bid to host the 2016 British Cycling National Road Championships.

British Cycling said it had been a tough decision, but the fact Stockton has previously hosted a National Series event was a contributing factor.

A spokesman said the events are seen as a "stepping stone" to hosting the event in the future.

A Manx government spokesman said it is a "path the island could follow".

Following an initial tender, British Cycling invited Stockton and the Isle of Man to present their final stage bids.

Jonny Clay, director of cycling at British Cycling, said it was "hard to choose between two strong bids".

He added: "I look forward to seeing Stockton's contribution to an event which is established as a landmark on the British sporting calendar." 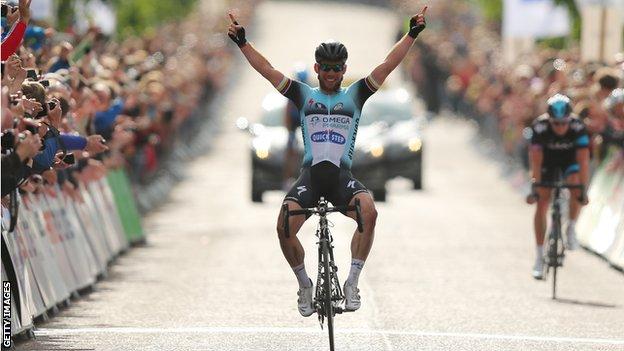 He said his department will continue to work with the Isle of Man Cycling Association (IoMCA) to secure a British Cycling National Series event in 2016.

IoMCA Chairman Richard Fletcher said they are "disappointed" but added there are "many positives."

He said: "In its feedback, British Cycling made clear that they wish to see the return of an annual cycle-racing festival on the Isle of Man, which would enhance our reputation as a world-class destination for cycling."

While the island has produced the last two men's champions - Peter Kennaugh and Mark Cavendish - it has not hosted the event for more than 30 years.

This year's event will be held in Lincolnshire in June.