Kevin Pietersen hit the first triple century of his career to make a dramatic statement to England's selectors two months before the Ashes.

The 34-year-old scored 326 not out for Surrey against Leicestershire, one day before new England director Andrew Strauss faces the media.

Pietersen, who was sacked by England in February 2014, later revealed he will meet Strauss on Monday evening.

Pietersen's triple hundred was the first in the County Championship since August 2011.

The South Africa-born batsman, who was 35 not out overnight, reached his first Championship century since June 2013 on the stroke of lunch.

Dropped four times as he peppered the boundaries at The Oval, he surged to his first double century since July 2012 from 276 balls after tea.

As Surrey supporters chanted "Are you watching, Andrew Strauss?", Pietersen went past his previous highest first-class score of 254 and reached 300 with his 12th six during an unbroken partnership of 110 with number 11 Matthew Dunn. Surrey closed on 528-9 in reply to Leicestershire's 292 all out.

Pietersen added: "I knew there was a lot of pressure on me today because Straussy has his press conference tomorrow and that's why I'm so proud of what I did today." 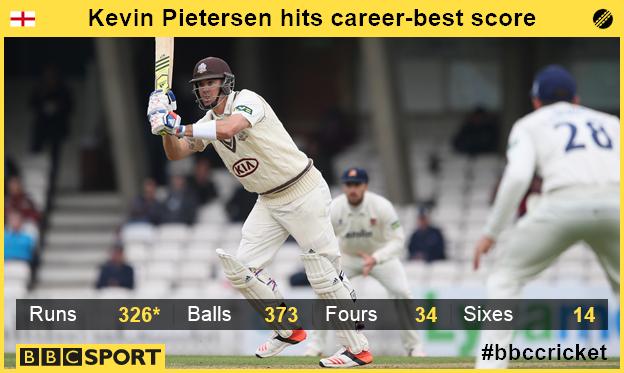 Former England captain Alec Stewart, Surrey's director of cricket, described Pietersen's innings as "one of the most incredible" he had seen.

Stewart added on BBC Radio 5 live: "It would be a real shame if the cricketing public are denied the chance to see Kevin Pietersen in an England shirt again."

At the start of the day, one of Pietersen's Twitter followers had asked him whether it was the most important innings of his life.

Pietersen replied: "Ha! Seriously? Not sure my career can be decided on one innings on a Monday in London...we get judged on Ashes series."

Michael Carberry's 300 not out for Hampshire against Yorkshire in August 2011 was the last Championship triple hundred.

Strauss is expected to address the issue of his former team-mate's future when he holds a news conference alongside new England and Wales Cricket Board (ECB) chief executive Tom Harrison at 12:00 BST on Tuesday.

In July 2014, Strauss apologised for making an offensive remark about Pietersen during a live television broadcast.

Pietersen, England's highest international run scorer, was sacked after the Ashes whitewash a year ago and accused of being "disengaged" from the team.

But when incoming ECB chairman Colin Graves gave him hope of a recall, the South Africa-born batsman decided to focus on winning a 105th Test cap and cut down his commitments to the Indian Premier League in order to sign for Surrey.

Pietersen's chances of a comeback have been further lifted by the dismissals of Downton and coach Peter Moores following a dismal performance at the World Cup.

Moores first led the national team between 2007 and 2009 but was sacked after being involved in a dispute with Pietersen.

England take on New Zealand in two Tests from 21 May at Lord's, with the Ashes starting on 8 July in Cardiff.

Pietersen is due to rejoin Sunrisers Hyderabad for the knockout stages of the Indian Premier League, which start on 19 May and finish with the final on 24 May.

Despite scoring 170 against Oxford MCCU, Pietersen had managed just 112 runs in four innings, with a high score of 53 not out, before the game against Leicestershire.

Surrey's Division Two opponents have not won a Championship match for more than two years, though their attack does feature Australia one-day bowler Clint McKay and seamer Charlie Shreck, who has 490 first-class wickets to his name.