There are six summit finishes to test the riders in the 21-stage race which climaxes in Paris on Sunday, 26 July.

He said: "The way the Tour's structured this year it is going to be the biggest battle we've seen for years." 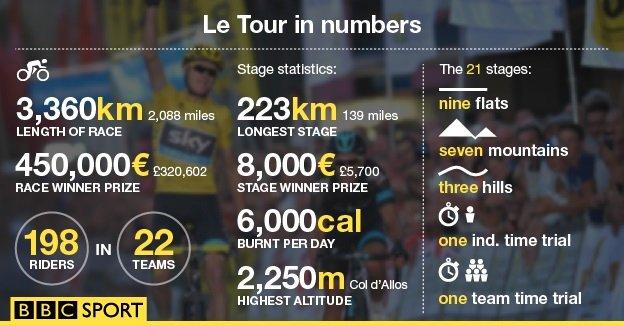 Why is this year going to be 'epic'?

In short, the four best riders in the world - Froome, Nibali, Contador and Quintana - are racing over one of the most mountainous routes in years. Throw into the mix 194 other riders, a nervy opening week that features an individual time trial, cobbled roads, crosswinds, short, sharp climbs and a team time trial and you have all the ingredients for a classic race.

But do not take our word for it. Britain's Geraint Thomas, who is part of Team Sky's nine-man squad and will be helping Froome, told BBC Sport that stage two, which will largely be raced along the Belgian coast with the threat of crosswinds will "probably be the most stressful day of the whole year's racing".

Froome was forced to abandon last year's race after fracturing his left wrist and right hand in falls during week one.

The 30-year-old said: "That first week is going to be crucial, the first nine days actually until we get up in the mountains on stage 10.

"In my mind, it's almost as if each one of these nine stages is like a classic race in its own right."

The second and third weeks are predominantly spent in the Pyrenees and Alps, culminating in the famed 21-hairpin ascent of Alpe d'Huez on the penultimate day of the race.

Froome and his yellow jersey rivals

Thomas reckons this year's Tour "is 100% a race for the pure climbers". He added: "I can't see the winner coming from anyone but Contador, Quintana, Froome or Nibali."

He said: "Things are looking good personally. My condition feels good and the whole team is buzzing after winning the Dauphine. That's lifted everyone's morale."

Defending champion Nibali will perhaps be more prepared to take risks in the opening week, as he did last year to great effect by winning stage two in Sheffield before impressing on the cobbles of stage five.

The 30-year-old Astana rider won by nearly eight minutes in 2014 and is one of only six riders also to win the Grand Tours of Italy and Spain.

He has admitted to struggling with an Achilles problem over the winter and "fatigue" at the Dauphine, where he gave up the lead and finished more than four minutes behind Froome.

But he won the Italian national title in June and said: "I needed this win. It's liberated me from a lot of the pressure I've been under."

While Froome and Nibali were doing battle at the Dauphine, Contador and Quintana were warming up at the Route du Sud - a shorter, but no less mountainous race in southern France.

Tinkoff-Saxo rider Contador, 32, won the four-stage race but said: "It would be a mistake to change the mindset right now, thinking that this win would give me more confidence."

The two-time Tour winner has also won all three Grand Tours and, after winning the Giro d'Italia in May, is looking to become the first rider since 1998 (and eighth in history) to win both in the same year.

Quintana, who won the 2014 Giro d'Italia, is widely regarded as the best climber in the world. He finished second behind Contador last week and Nibali believes the 25-year-old is "the most dangerous rider" at the Tour.

Second when Froome won his Tour title, Quintana has only had four racing days in the past two months, preferring to be "training well in a nice temperature, at altitude" in his native Colombia.

"This Tour won't be a four-way battle," insists Quintana, who selects French duo Thibaut Pinot and Romain Bardet, and American Tejay van Garderen as riders to watch out for.

"A single attack from one of these guys, and the Tour could be over if we don't respond quickly enough," said the Colombian.

Pinot, 25, finished third last year and was crowned best young rider, while 24-year-old Bardet won a stage at the Dauphine that will be replicated on stage 17 of the Tour.

However, no French rider has won the race since Bernard Hinault claimed his fifth title in 1985.

British twins Simon and Adam Yates, 22, will ride for Australian outfit Orica GreenEdge, and Thomas is tipping the pair to shine in a race that will suit those happiest in the mountains.

"The Yates brothers are strong climbers, and the way the Tour is this year it's certainly a route that will favour the climbers," he said.

"There's less than 14km of individual time trial, and although there is a decent team time trial, they are part of a team that is super-strong in that discipline."

Simon made his debut last year and featured in two breaks before being withdrawn by his team on the second rest day, while Adam is making his Tour debut.

The points system has been changed to favour sprinters who tend to do best on flatter finishes, and that means the odds are stacked slightly more in Mark Cavendish's favour.

Put simply, victories on flat stages will be worth 50 points, double those awarded for winning on hillier stages.

Cavendish, who is joint third on the list of most Tour de France stage wins with 25, will have his Etixx - Quick-Step team-mates at his disposal for sprint finishes.

The Manxman told BBC Sport about the "special" relationship he shares with his Australian lead-out man Mark Renshaw, who was so pivotal to his sole green jersey win to date, with HTC-Highroad in 2011.

Germany's Andre Greipel, Alexander Kristoff of Norway and France's Nacer Bouhanni are the other pure sprinters in the 198-strong field who also have designs on the jersey.

Thomas said: "Kristoff has won many races this year, is looking super-strong and is the stand-out contender with Cavendish."

That does not mean a pure sprinter will win the title though.

Peter Sagan's ability to 'punch' his way up steep climbs over short distances has seen the Slovakian dominate the green jersey competition for three years.

He finished in the top five on each of the opening seven stages in 2014, steadily accumulating points, as he won the title without winning a stage.

What about the rest of the Brits?

There's a record-equalling 10, up from four last year, and the same as in 1955. Team Sky have the most with five. As well as Froome and Thomas, they have newly crowned British national champion Peter Kennaugh, along with Ian Stannard and Luke Rowe.

They will have a big role to play in keeping Froome safe through the wind and cobbles of the opening week.

Movistar's Alex Dowsett, whose world record for riding the furthest distance in an hour lasted just over one month before it was broken by Sir Bradley Wiggins in June, will make his Tour debut.

Add in Cavendish and the Yates twins, while Steve Cummings rides for the first African-based team to tackle the Tour, Team MTN-Qhubeka.