Britain's Geraint Thomas suffered a spectacular crash on the 16th stage of the Tour de France as he collided with Warren Barguil on the final descent.

The Team Sky rider hit his head on a telegraph pole and fell off the side of the road but was soon back on his bike.

Sagan finished second for the fifth time in this year's Tour.

After Tuesday's rest day, the Tour continues on Wednesday with a 161km stage starting in Digne-les-Bains.

There had been relatively few alarms during the 201km stage from Bourg-de-Peage to Gap until Thomas's dramatic crash.

Thomas was in a dwindling group of riders making their way down the descent from the category two Col de Manse when French rider Barguil got his line wrong on a corner and ran into the Welshman.

Barguil managed to stay on the road but Thomas was propelled towards some spectators standing on the outside of the bend.

The Welshman struck a telegraph pole heavily and was thrown over the edge of the road. After initial uncertainty over what had happened to him, it soon emerged that he had been able to rejoin the race and he eventually finished less than 40 seconds behind the remnants of the yellow jersey group.

Thomas, who retained sixth place in the general classification, said: "Everyone knows it's a dodgy descent, I just got taken out - 100% it was a mistake.

"I feel all right for now - I guess the doctor will ask me my name and date of birth soon.

"A nice Frenchman pulled me out - but I lost my glasses as well. They don't even make them any more."

Barguil argued that Tejay van Garderen had touched him with his shoulder going into the bend. Van Garderen said: "Warren was trying to come over the top of me. I was trying to keep my position and stay safe."

Team Sky had gone into the day with all nine of their riders but lost workhorse Peter Kennaugh earlier in the stage when he abandoned.

"Pete has been suffering from a respiratory illness for the last two days," said Team Sky doctor Richard Usher.

"He had been recovering and felt better ahead of the start, but the combination of the heat today and the fast start in the peloton made it extremely difficult."

It was a very sedate stage for the general classification contenders for most of the day but it exploded into life in the final half hour as they climbed up the Col de Manse before the fast descent into Gap.

Froome lost his able lieutenant when Thomas crashed but he still had team-mate Wouter Poels with him and was able to reach the finish without losing any time to any of his major rivals except Nibali, who is seven minutes 49 seconds behind.

A day to remember for Ruben

After a flurry of attacks early in the stage, a group of 23 riders eventually pulled clear and built a substantial lead over the peloton that at one point was more than 20 minutes.

Green jersey holder Sagan was in that group and seemed determined to claim his first stage win at the Tour since 2013 as he repeatedly chased down attacks off the front of the breakaway as they neared the finish in Gap.

Sagan is an excellent descender and obviously fancied his chances if he could reach the top of the category two Col de Manse close to the finish with the breakaway all together.

The Tinkoff-Saxo rider led the chase to reel back an attempt to pull clear by Adam Hansen and Marco Heller but Lampre-Merida rider Plaza got clear up the slopes of the day's final climb and held on during the descent to finish 30 seconds clear of the unfortunate Sagan.

"It's the most important win of my 15 years as a professional," said Plaza.

It was not all bad for Sagan, though, as he won the day's intermediate sprint and picked up more green jersey points for finishing second and now has an 89-point lead over Andre Greipel. 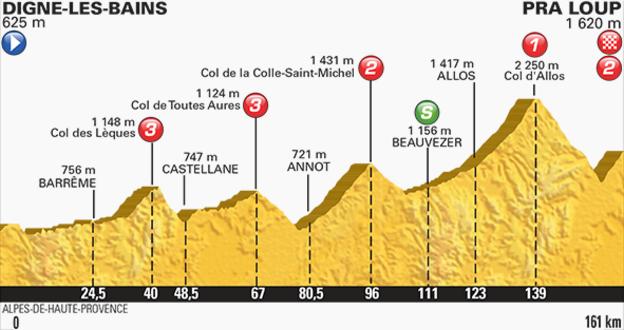 The second and final rest day of the Tour takes place on Tuesday before the race moves into the Alps with four potentially decisive stages culminating in a climb up Alpe d'Huez on Saturday.

After that all that remains will be the largely processional final stage into Paris, where the sprinters will get one more final shot at glory.

When action resumes on Wednesday the riders will go the 161km from Digne-les-Bains to Pra-Loup.

That takes us over the category one Col d'Allos as well as two category two climbs (including a summit finish at Pra-Loup) and two category three climbs.

"All the yellow jersey contenders will try to go as hard as they can on the final climb and into the finish," reckons Geraint Thomas.