"It's the cycling equivalent of Lewis Hamilton taking the Formula 1 title then heading off to win the Le Mans 24 hour race and Paris-Dakar rally."

That is how retired Olympic gold medallist Chris Boardman illustrates the scale of the achievements by the best current all-round cyclist in the world. But who is he talking about?

Ferrand-Prevot will defend her road world title in Richmond, USA on Saturday, fresh from a remarkable 12 months on the bike.

It is a superb run of form that threatens to ruin Britain's Lizzie Armitstead's pursuit of a maiden global major championship gold, both at the Road World Championships this weekend, and the Rio Olympics.

However, if the French federation had had their way, Ferrand-Prevot's rainbow jersey-chasing would have been over before it started.

"People wanted to put me in one category, I think because it was easier for them," she said. "The French federation was not so happy because they wanted me to make a choice. But I said no. Now with all my world titles I am very happy because I can say to all those people that what I chose to do was good for me."

'In best shape of my life'

Such single-mindedness is not a new discovery. This is a woman who quit one of her first sporting passions, ice dancing, aged eight because the winner was decided by judges, not a finishing line.

"In cycling you just race," she says. "When you get to the finish you see the result. In ice dancing, you cannot decide your result. You just have to do your best and you can't decide if you win or not."

As if to further ram home the point about her considerable ability as a jack - and master - of all trades, Ferrand-Prevot is in bullish mood about her Road World Championships chances. Just three weeks separate her mountain biking global triumph and Saturday's road race title defence. But she is not concerned.

"Preparation for Richmond has been very good - perfect I think," she said. "I have recovered and trained again and I think I am in the best shape of my life so I am very happy with that." 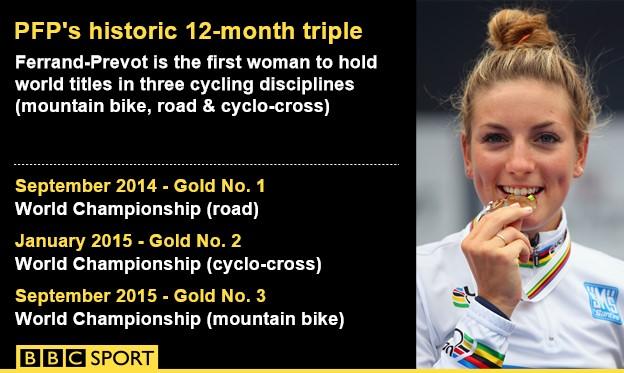 Ferrand-Prevot is not the only multi-talented athlete to have hit a purple patch this year. Her boyfriend Vincent Luis has enjoyed a breakthrough year in triathlon. Like Ferrand-Prevot, three has also been his magic number.

Their mutual breakthrough has captured the French media's imagination, and left Ferrand-Prevot dreaming of a dual Rio medal hunt.

"Vincent is having the best year ever. Triathlon was not so famous in France but because of his results now people know more and more about the sport," she says.

"We have had to do interviews together in magazines - the media like us because we can both get a medal in Rio and we don't do the same sport. We do our cycling together. I run and swim a little bit, but not like him."

Another triple triumph in Rio?

Ferrand-Prevot is hoping to make Rio a triple gold-medal celebration. With no cyclo-cross in the Olympics, the French rider is targeting the road race, time trial and mountain bike cross-country titles.

By her own admission, amidst the heady atmosphere of the Olympic Village at London 2012 a 19-year-old Ferrand-Prevot made "some mistakes" - finishing eighth in the road race and 26th in the cross-country.

It is a mistake she will not repeat in Rio - she will stay elsewhere - but it was an experience that tempers her usual confidence when it comes to talk of the possibility of three Olympic medals.

"I don't know," she said. "For the moment I am more thinking about the preparation. The Olympic Games is every four years. I really want to focus on my race and if I miss something in the Olympic Village, it doesn't matter for me if I go back to France with one medal, or more."

'To win across three disciplines is phenomenal'

More than one medal seems a good bet on current form. At 23, Ferrand-Prevot is mature beyond her years and a precocious, yet unheralded, talent.

Former Commonwealth road race champion and BBC Sport pundit Rochelle Gilmore says: "I think it's actually not really been as hyped up as it should be because to win across those disciplines is absolutely phenomenal.

"It's really hard to comprehend. To put it into context, we saw how Marianne Vos, one of the greatest female cyclists of all time, tried to cross over into mountain bikes and just that one extra discipline was difficult for her."

Vos planned to focus heavily on mountain biking this year in a bid to add a second discipline to her Rio schedule, only for injury to decimate her season.

Despite her personal struggles, Dutch rider Vos has still made time to mentor - and mother - her Rabo Liv team-mate Ferrand-Prevot. She even delivers the occasional telling-off.

"Yes, if I don't eat enough or I train too much or not enough," Ferrand-Prevot said. "Because she is very important to me I make sure I listen to her.

"It's funny because Marianne is like my mother. Once a week she sends me a message to see how I feel, how I am and also take care of me."

Vos' incredible CV - including 12 world titles - means Ferrand-Prevot, despite her amazing last 12 months, is very much the apprentice. But could she upstage the master in Rio?