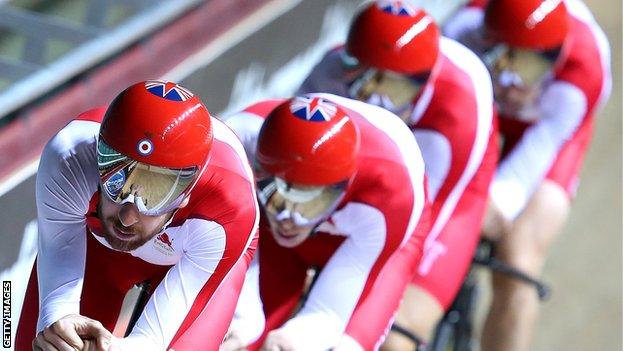 Both riders are in qualifying action in their team pursuit squads from 17:30 BST on day one in Switzerland.

It will be Wiggins's first Rio Olympic qualifying outing since he decided to return to the track from road racing.

Points earned in Grenchen will help towards securing places at next summer's Games in Brazil.

Wiggins and Trott are part of a strong British contingent competing at the event that runs until Sunday.

However, Ed Clancy misses out through injury, while Becky James has been omitted as she continues her recovery from a long-standing knee problem.

One of the cyclists hoping to win maiden European honours is sprinter Katy Marchant.

The 22-year-old is in good form going into the event having won four national titles in the 500m time trial, sprint, keirin and team sprint at the British Championships in September.

"I went to the Europeans last year but it's different this time as I put a lot more pressure on myself," Marchant told BBC Sport. "I've stepped up as a rider so I'm really excited to see what happens."

The Yorkshirewoman was an aspiring heptathlete - training in Sheffield alongside Olympic and world champion Jessica Ennis-Hill - before she took up cycling in April 2013.

"Every now and again myself and Jess will text each other," said Marchant. "Her mentality and focus is something I learned from her - as well as finding a balance between work and play.

"It's been tough learning to ride a bike - as simple as it sounds. But I'm trying my hardest and hopefully results will come but I'm sure I'll be learning more for years to come.

"At these Europeans I just want to hold the form I have at the minute and show the coaches what I'm capable of going forward to Rio."

Great Britain only won three silver medals at February's World Championships but Marchant feels progress has been made.

"Things have changed a lot since then. The new sprint coach, Justin Grace, has had a big impact on the men's and women's teams," said Marchant.

"We've been doing a lot of strength and power work - and tactical work alongside that. The atmosphere is really good and so we're really looking forward to it."