Froome, 31, was over six minutes behind the Dutch winner on a tortuous stage in the Pyrenees but finished alongside his main rivals, including fellow Briton Adam Yates, who stays in second place.

Yates, 23, remains in the young riders' white jersey, while Mark Cavendish is still in the sprinters' green jersey despite a day spent at the back of the peloton.

After the 184.5km stage, which started in Spain and comprised three category one climbs and the first mountain-top finish this year, the riders will take a rest day on Monday before resuming on Tuesday.

In the race for the king of the mountains, France's Thibaut Pinot (FDJ) took the polka dot jersey from Poland's Majka (Tinkoff).

Dumoulin proves he is more than a time-trialist

Dumoulin's victory came courtesy of a classic breakaway from a large group of riders, which reduced in numbers but kept the peloton at least five minutes behind them on a day when temperatures soared to 35C.

With no general classification contenders among them, Team Sky and others hoping to make a yellow jersey challenge did not narrow the gap, which increased to eight minutes at the bottom of the last climb up to Andorre Arcalis.

Polka dot jersey holder Majka and Pinot were neck and neck with Dumoulin, but the Team Giant-Alpecin rider burst up the hors category climb and quickly established a lead which his rivals could not close as a downpour began.

The 25-year-old is renowned as a time-trialist but his first Tour de France win means he has now won a stage in each of the three Grand Tours, which includes Giro d'Italia and Vuelta a Espana.

He said: "I am so tired I cannot speak, it was an incredible day and it was so, so hard but I did it.

"It's very, very special [to win on all three Grand Tours]. I'm of course a time-trial specialist but I showed that I can do more." 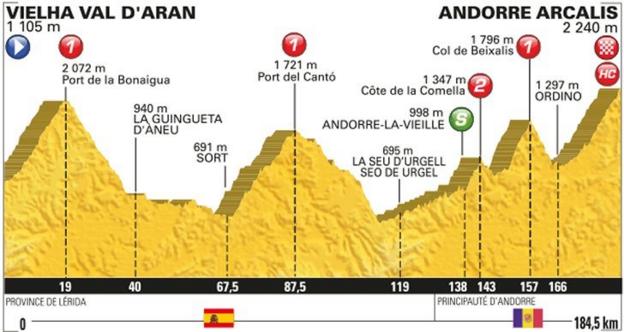 Froome 'couldn't be in a better place'

Despite a third consecutive days in the Pyrenees, defending champion Froome had a relatively stress-free day as his main general classification contenders failed to break free from the peloton for most of the stage.

But as the field became stretched up the final ascent, there were attacks from rivals including Yates, Movistar's Nairo Quintana, BMC's Richie Porte and Ireland's Daniel Martin of Etixx-QuickStep, all of which the two-time winner coped with in pouring rain.

The biggest threat seemed to come from roadside fans, who ignored Froome's pleas to stay out of the way after he came into contact with one of them on Saturday.

New Zealand rider George Bennett (LottoNL-Jumbo) collided with one supporter as he descended towards the end of the stage, but neither party was hurt.

Froome, who had taken the yellow jersey after an unexpected attack on stage eight, said: "That was a tough old day out there, going from the extreme heat to a hailstorm at the finish and 10C.

"In the back of my mind I was waiting for [Quintana's] attack all the way up the last climb. I thought he was saving it for one big one, but that never came. I would like to think he was on his limit.

"He just stuck to my wheel like glue. He seems to be going well but right now he's not showing any more than anyone else.

"The [Team Sky] guys have done everything, they have ridden from start to finish and I couldn't be in a better place right now - although the others are right up there in contention."

Spain's Contador - the 2007 and 2009 winner who crashed twice in the opening two stages - had been suffering from a fever and got off his bike with about 104km left of Sunday's stage.

The Tinkoff rider started the day more than three minutes behind leader Froome, but quit the race after dropping back four times to talk with his team during the stage.

After a record run of seven stages without any withdrawals - with the first on stage eight - Sunday saw several abandonments, including that of Mark Renshaw, one of Cavendish's lead-out men for Team Dimension Data.

Froome said of Contador's departure: "We are not going to have to chase his attacks 100km out any more. It's one less thing for us to worry about, but it's maybe a shame for the race."