Australian Matthews, 25, of Orica-BikeExchange won a sprint finish ahead of Peter Sagan and Edvald Boasson Hagen to claim his first Tour victory.

Defending champion Froome finished in the peloton, nine minutes 39 seconds behind Matthews, on the 197km stage from Escaldes-Engordany to Revel.

Britain's Adam Yates, Matthews' 23-year-old team-mate, was in the same group to keep the white jersey for best young rider.

2013 and 2015 winner Froome and his main rivals enjoyed a relatively comfortable day, which started with a big climb but flattened out to suit a breakaway win.

The main contenders for the yellow jersey were happy to let a group of 15 riders - none of whom threatened the overall lead - surge ahead.

Britain's Steve Cummings, who won stage seven, was part of the breakaway but dropped back as two Orica team-mates helped Matthews earn an emotional win.

Matthews almost 'gave up' on Tour

Matthews said he came close to "giving up" on the Tour de France after breaking four ribs in a crash last year, and missing the 2014 race following an accident.

But his win continued Orica's impressive Tour, with Yates second in the general classification standings, 16 seconds behind Froome.

While Yates has produced some superb solo performances, Matthews was helped by team-mates Luke Durbridge and Daryl Impey as they neutralised the threat of Tinkoff's world champion Sagan.

Durbridge's pace reduced the breakaway to seven riders before he dropped out, with Impey launching several attacks in the last few kilometres.

Matthews waited until the final 200m to make his move, overtaking BMC's Greg van Avermaet and Sagan in the last 50m.

"To have won a stage after two really bad years in the Tour de France, the emotion is just sinking in," said Matthews, who has also won stages at the Giro d'Italia and Vuelta a Espana.

"I was close to giving up on this race, thinking it was maybe not for me, but today was incredible.

"It was never the plan to go in the breakaway. We were hoping for bunch sprint after the last climb but we had strong guys, and whoever is up we give them 110%. Daryl and Luke gave me everything." 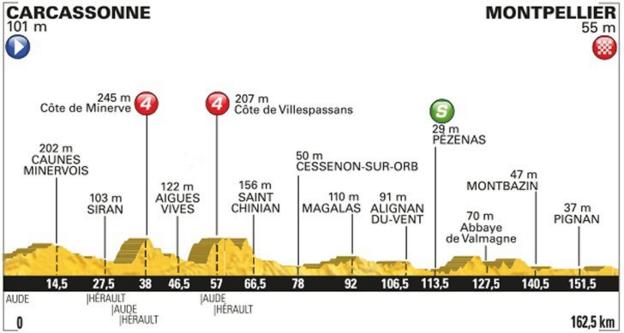 Cavendish loses green - but could he win it back?

Sagan overtook Cavendish in the green jersey standings after winning the intermediate sprint and finishing second to Matthews.

Cavendish, who has won three stages in this year's race, finished in the peloton and now trails Sagan by 38 points.

Sagan has won the green jersey in each of the past four years, and Manxman Cavendish, 31, said before this year's race that he cannot beat the world champion.

Cavendish, whose tally of 29 career stage wins is bettered only by Eddy Merckx's 34, could challenge for a 30th on a largely flat stage 11, which takes the riders 162.5km (101 miles) from Carcassonne to Montpellier.