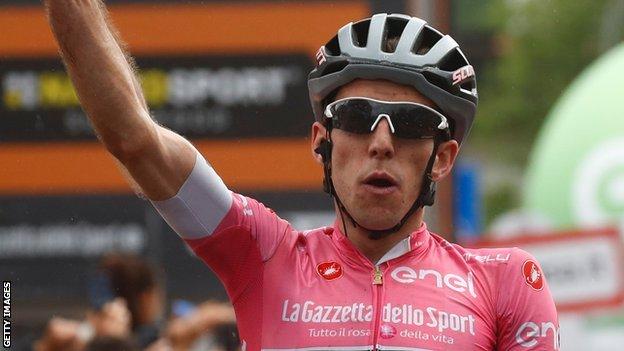 Britain's Simon Yates stormed to a sensational solo win on stage 15 to take a tight grip on the overall lead at the Giro d'Italia.

The 25-year-old attacked with 18km to go of the stage to Sappada to blow away his rivals for the pink jersey.

No Briton has ever won the Giro but with one week to go Yates now has a lead of two minutes 11 seconds.

He admitted to feeling emotional after his third road stage win of this Giro.

Yates becomes the first man to win three stages while wearing the pink jersey since 2003 when Gilberto Simoni went on to win. Vincenzo Nibali won three while race leader in 2013 but one was an individual time trial and another awarded to him after stage winner Mauro Santambrogio tested positive for EPO and had his results annulled.

"I didn't know that," Yates told Eurosport. "I do like the stats, I like the numbers. It's really fantastic. I don't know why but I'm a bit emotional after today. I really gave it everything."

It was arguably his most impressive stage win yet, his sparkling form matched by the elan with which he timed his move.

Dumoulin stays second overall after battling through to finish third on the stage, 41 seconds behind Mitchelton-Scott rider Yates and picking up only four bonus seconds for his placing compared to Yates' 10 for the stage win.

Monday is a rest day before Tuesday's time trial when Yates faces a battle to stay in the maglia rosa.

"It's a good gap but (Dumoulin) could take two minutes out of me in a time trial. I've been fighting since Israel to have a good gap. I'm happy with that gap but it could disappear in 35km. We'll have to see."

Froome, who had looked reborn in his win on Monte Zoncolan on Saturday, lost a minute and a half on the day and is now almost five minutes down on his young compatriot, dropping two places in the general classification to seventh.

On a punchy day of second category climbs the racing was relentless, a huge break of 26 riders going up the road early on but gradually being whittled down to just Italy's Guilio Ciccone and German Nico Denz with 30km to go.

Dumoulin's Sunweb team pushed the pace hard in the main pack as the race climbed into the final hour, Yates watchful on his rival's wheel and Froome in the company of Team Sky team-mate Sergio Henao.

With 18km to go, an acceleration from Miguel Angel Lopez on the penultimate climb caused splits in that group and Froome was the man to pay the price, dropping back and left without team-mates.

Yates spotted his fellow Briton's distress and attacked, as any ruthless race leader should, jumping away to an 18-second advantage over a five-man group of Dumoulin, Lopez, Richard Carapaz, Domenico Pozzovivo and Thibaut Pinot, with Froome quickly a minute and 10 seconds adrift.

It was a move of both bravery and risk, but with the chasing group unwilling or unable to work together, Yates kept pushing up the final climb and extending his precious lead.

He looked exhausted at the finish but knows he has given himself a wonderful chance of making history.

Meanwhile, Ireland's Nicholas Roche and BMC team-mate Loic Vliegen both abandoned the race on Sunday. It was the first Grand Tour Roche had failed to finish in 19 races.