Every four years, Britain's cyclists demonstrate at the Olympics that they are among the very best in the world.

Bradley Wiggins, Laura and Jason Kenny and Chris Hoy are among those who have become household names by their success in the sport.

Next to that sort of star quality, Simon Yates is a relative unknown. But it is he who stands on the brink of history - becoming the first Briton to win the Giro d'Italia, one of cycling's Grand Tours.

The 25-year-old goes into the final five days of the Giro as clear favourite after surviving Tuesday's time trial - a relative weak spot for him - with a 56-second lead, and with stages that suit him better still to come.

But who exactly is Simon Yates?

1. He is a twin - younger brother Adam is also a professional cyclist and was part of Britain's men's road race team at the Rio Olympics in 2016.

Adam finished fourth at the 2016 Tour de France and became the first British rider to win the young rider classification.

The Yates brothers grew up in Bury, in Greater Manchester, and say black puddings are one of the town's best exports.

2. Simon says his greatest achievement so far on the bike is his unexpected 2013 points race gold medal at the World Championships in Minsk at the age of 20.

3. He has served a ban for 'non-intentional' doping.

During the 2016 Paris-Nice race, he was taking the banned substance terbutaline to treat his asthma, but his team's doctor had failed to apply for a therapeutic use exemption (TUE) which would have meant he could take it and stay within the rules. The team took responsibility for the administrative error but Simon was still given a four-month ban.

4. Simon and Adam got into cycling after their father John collided with a car while out riding.

During his recovery, he took his boys along with him to the Manchester velodrome, and from there they were hooked.

Both brothers showed obvious talent and soon joined their father's cycling club, where they were spotted by pro teams and British Cycling.

How has he got to this point?

In 2018 he won stage seven of the Paris-Nice to take the overall race lead going into the final stage only to be pipped by Movistar's Marc Soler, who beat him by four seconds. 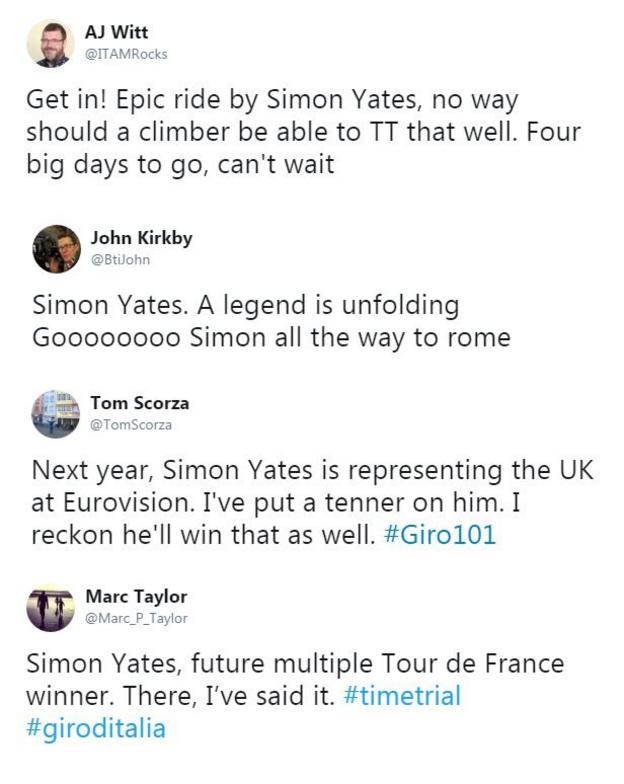 How have the Italian media reacted?

Just how big an achievement will it be if he wins?

No British rider has ever won the Giro. Several have been fancied to, not least Sir Bradley Wiggins, the year after he had become the first Briton to win the Tour de France.

But just as Wiggins was defeated by a combination of injury and a loss of nerve on the race's treacherous descents, so Team Sky's other attempts were also derailed; Geraint Thomas was in fabulous form in 2017 but then collided with a badly parked police motorbike and was forced to abandon with injury a few days later.

Chris Froome had been the Briton most expected to succeed this year, but he crashed before the race even began, on his reconnaissance lap of the time-trial course for the opening stage in Jerusalem.

But while Sky's attempts to control this wild race have repeatedly failed, Yates has ridden into pink in a very different way - with constant attacks, with unpredictable moves. If he gets his reward in Rome on Sunday it will be entirely deserved.