The 2018 Tour of Britain will begin in south Wales and end in London.

Newport last hosted the Tour in 2004, while the final stage of the 2017 race passed through the city on its way to the overall finish in Cardiff.

The race, which finishes on 9 September, will feature a team time trial for the first time.

That will take place on stage five in Cumbria, covering 14 kilometres from Cockermouth to Whinlatter Pass in the Lake District, with plenty of challenging climbs thrown in elsewhere.

A day later the riders will return to the summit, but this time coming up the tougher eastern side at the end of a 169km stage which starts in Barrow-in-Furness.

"Our partners at Cumbria County Council have helped us to achieve something that we have been keen to do for a number of years on stage five - a team time trial that finishes atop Whinlatter Pass," said race director Mick Bennett.

"This will be a test like no other, as teams will have to get their equipment choices and tactics spot on. The race may not be won here, but some riders could certainly lose it.

"In another first for the OVO Energy Tour of Britain, we return to the same climb the following day for a double ascent of our summit finish - although riders will tackle it during a conventional road stage, albeit from its harder eastern side." 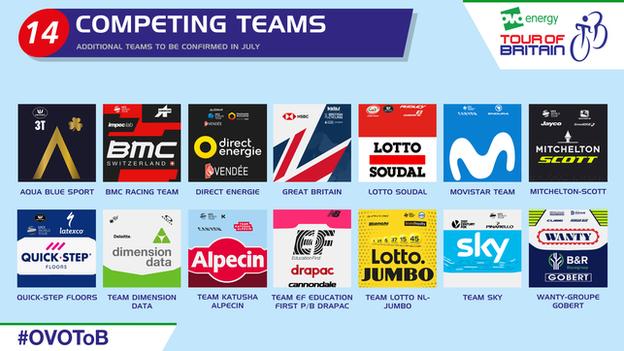 Devon will host stage two on Monday, 3 September, starting at Cranbrook and finishing in Barnstaple, including the 13% inclines of Challacombe some 20km from the finish line.

"This year we have worked hard to create an innovative and unpredictable route, with several surprises in store throughout the race," Bennett added.

"Several stages have stings in the tail; climbs positioned towards the finale of stages one, two and three will keep the outcome up in the air until the very end."

Stage three will take the riders over a lumpy 125km circuit which starts and finishes in Bristol, with the 183km stage four from Nuneaton to Royal Leamington Spa revisiting roads which will feature on this year's Women's Tour in June.

After stages five and six in Cumbria riders face their longest day in the saddle, a 223km stage from West Bridgford to Mansfield before the finale in London, which will cover 14 laps of a 5.5km circuit around the capital.

With a series of sprint finishes keeping time differences at a minimum, Dutchman Lars Boom won the 2017 Tour thanks to his victory on the stage five time trial, and his LottoNL-Jumbo squad are one of 10 WorldTour teams already confirmed to take part this year.