Team LottoNL-Jumbo's Groenewegen pulled clear of Fernando Gaviria to win comfortably and deny the Colombian a third stage win at this year's race.

Peter Sagan was third as the sprinters tussled in a late frenzy in Chartres after 231km that lacked drama.

Britain's Mark Cavendish appeared in contention but slipped to 10th late on.

Cavendish, who is chasing a 31st stage win to close on the Tour record of 34 held by Belgian Eddy Merckx, said a late collision hampered his finish but conceded other teams are in better form.

"I was following quite good wheels but it was choppy," said Team Dimension Data rider Cavendish, 33.

"I went to go but Quick-Step and Bora-Hansgrohe just seem to have another level.

"I kicked but couldn't match them. I had a little coming together at the end, it may have been my fault and it stopped me dead in my tracks."

Welshman Thomas is now six seconds behind Greg van Avermaet in the leader's yellow jersey after the BMC rider surged off the front of the peloton to take three seconds at a bonus sprint point.

"It was a long day in the saddle - the final was super fast and stressful but that's another day done," Thomas told BBC Radio 5 live.

"The first week has been good but it would have been nice to wear the yellow jersey. I could have not asked for much more, though."

Dutchman Groenewegen, 25, proved himself as one of the most talented young sprinters by winning the final stage of last year's Tour on the Champs Elysees but had struggled so far this year.

"It was very difficult, I didn't have good legs in the beginning of the Tour and my timing was missing but I did it here," he said.

The manner of his second Tour win was particularly impressive, not needing a lead-out man and swinging round the outside of Gaviria to beat him by two bike lengths.

If he maintains his form, Groenewegen could establish a new dominant sprint trio alongside Gaviria and the reliable Sagan in this Tour.

In contrast, Cavendish was again boxed in even before he clipped wheels with Alexander Kristoff, while of the Briton's previous main rivals, Andre Greipel faded to eighth and Marcel Kittel, who won five stages last year, could not contest the finale.

Should stage lengths be capped?

This was the longest stage of this year's Tour and clearly one the peloton had marked out as a chance to have a relatively sedate day, the stage ending about 15 minutes after the latest scheduled finish time.

Two groups tried and failed to break clear before Frenchman Yoann Offredo hit out alone, only to be caught with 90km to go. His compatriot Laurent Pichon then attacked but was reeled in with ease 50km later.

The only other moment of note before the sprint finish was AG2R La Mondiale attacking to briefly to split the peloton into three groups in a rare crosswind, but the race came back together quickly once the wind changed direction.

"Maybe they should just have the stages at less than 200km in Grand Tours, it would be more exciting for everyone," Thomas told ITV4.

Another sprint on stage eight?

In his stage-by-stage guide for BBC Sport, Cavendish said: "Another bunch sprint, although this time it's a bit more of a technical finish.

"It's a difficult sprint to get right when you have a corner with 600m to go but it's one I've done before and the sprinters will be looking forward to it before we have to take a back seat for a few stages." 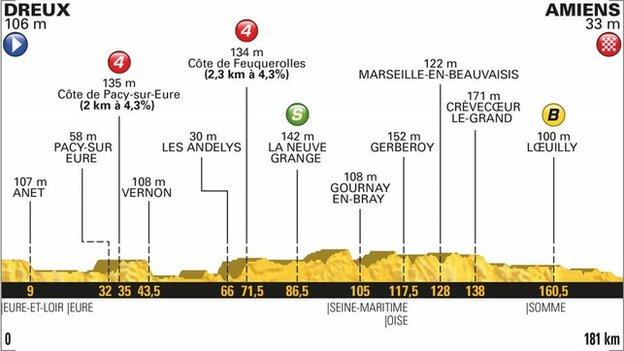