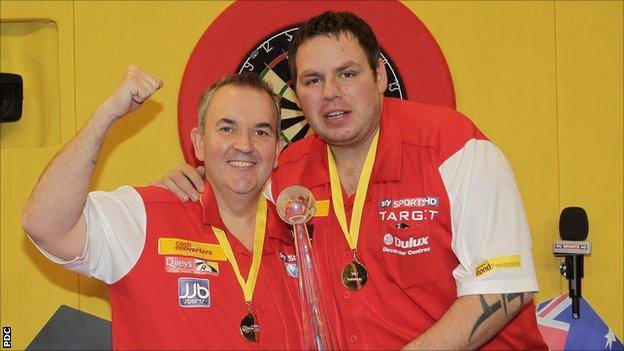 England have won the World Cup of Darts after defeating Australia in the deciding leg of the final in Hamburg.

Phil Taylor and Adrian Lewis, both from Stoke-on-Trent, appeared to be in control of the match after winning their first three singles matches.

But Paul Nicholson beat world champion Lewis and then won the doubles alongside Simon Whitlock to force a sudden-death leg for the title.

"I thought we'd thrown it away when Paul beat me in the last singles game and then Australia won the doubles," said Lewis.

"At times this weekend I pulled Phil through, but in the final, when it got tough, he pulled me through. It was a great team effort.

"This probably means more to me than winning the second World Championship title.

"People don't realise what it means to you when you pull on the England shirt. I've never felt under so much pressure in my life."

Taylor, who lost in the second round in 2010 when playing alongside James Wade, added: "I'm over the moon and it means a massive amount to me.

"It was a great team effort from us both. I thought we'd blown it when they won the doubles and it went to that last leg.

"As a player, I'm a bit disappointed that we missed doubles in the final leg, but it made a great final for the fans because there was drama and tension."

Taylor and Lewis will not have long to celebrate the victory - they face each other in the first week of the Premier League, which starts in Manchester on Thursday.