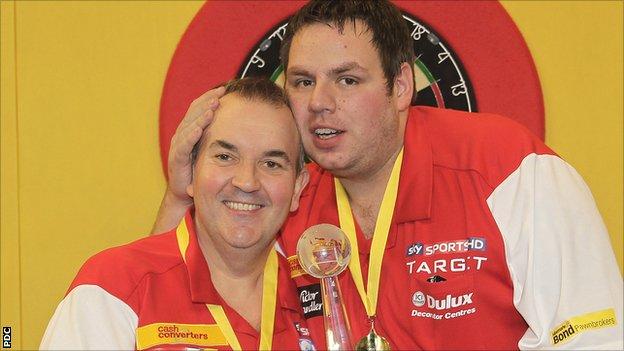 Phil Taylor, one half of the successful English pair with Adrian Lewis, told BBC Radio Stoke: "People say 'how come darts players are so good from Stoke?'.

"I'll tell you why - because we work hard at it.

"We're a working-class area and whoever gets a chance to do well for themselves, they get stuck in and they work hard."

The Potteries duo needed plenty of hard work in their World Cup win, defeating Australia in a sudden-death leg to claim the trophy in Hamburg.

"I was dead proud of Adrian because I left him the worst double on the board - double five - and he went bang right in the middle," said Taylor.

Lewis added: "I thought 'come on, don't bottle it'. I threw it more in hope than accuracy.

"In all fairness, I pulled him through the first few rounds, and then in the final he pulled me through."

On Sunday, they were team-mates. On Thursday, they will be enemies.

"We've got a love-hate relationship. I love him and he hates me," joked Lewis.

"We got on really well, but while we're up there we've got a job to do."

Taylor added: "The atmosphere is going to be buzzing. If you can't play well in that atmosphere, there's something wrong with you. I'll be trying my socks off to win."

Taylor suffered a shock exit to Dave Chisnall in the second round of the PDC World Championships, but he freely admits that the defeat did not affect him as badly as it might have done in previous years.

"I know what I've done wrong and I've changed things," he said. "To me, it's not the end of the world any more.

"I've been so dedicated for 25 years. I still am dedicated. But there are other things in my mind that I want to do as well.

Andy Hamilton, runner-up to Lewis at the World Championships, completes the Stoke-on-Trent trio among the eight-man Premier League field that will be competing for a first prize of £150,000.

The 44-year-old will play 2009 winner James Wade on his Premier League debut in Manchester on Thursday.

"I'm obviously a bit nervous. That's just the occasion I suppose," he said.

"I'm also really, really excited. It's something I've waited for two or three years for so it's come at a good time for me now.

"I beat some really good players at the World Championships and I'm not scared of anybody now.

"My self-belief is there, my confidence is there, so hopefully I can go ahead and do what I know I can do."

And if you thought that Stoke-on-Trent's darts talent ended with the three Premier League players, think again.

Ian White impressed at the Grand Slam of Darts in Wolverhampton last November, in his opening group match.

And Potteries-born Ted Hankey, the BDO world champion in 2000 and 2009, announced in January that he had switched to the PDC.

So will Stoke-on-Trent's domination of darts continue with a Premier League victory in 2012?

Wade, Van Barneveld, Gary Anderson, Simon Whitlock and Kevin Painter will all be trying to make sure the title does not end up in Staffordshire on 17 May, when the Premier League reaches it's climax at the O2 Arena.