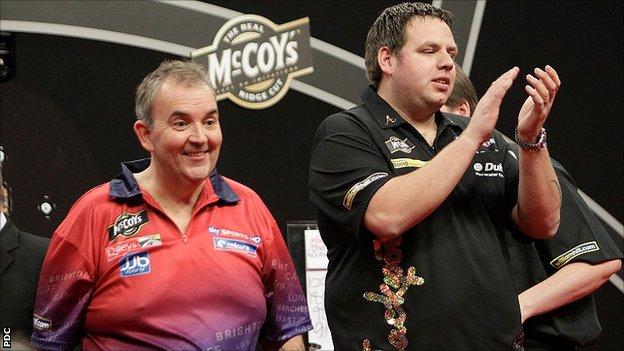 Lewis led 5-0 and 6-1 before Taylor reeled off six of the last seven legs.

Taylor's three-dart average of 112.79 was the second-highest in Premier League history, while his Stoke-on-Trent rival Lewis averaged almost 105.

There were wins for Kevin Painter and Andy Hamilton, while Simon Whitlock and Raymond van Barneveld also drew 7-7.

But the highlight of the opening night of action was the duel between the top two players in the world rankings, who were team-mates when England won the World Cup of Darts in Germany on Sunday.

Both said it was one of the best matches they had ever been involved in.

"It was a good comeback," Taylor told BBC Radio Stoke. "I was playing well and I was 5-0 down.

"I thought Adrian's finishing in the first six legs was superb. I tried but I didn't get a shot.

"That's the best I've seen Adrian play ever. We're both setting the bar now and over the next 12 months I'm going to try and raise the bar."

"It was an unbelievable match. Everyone's been asking if I'm disappointed, and I'm not disappointed.

"For the last six or seven legs, Phil must have averaged about 120. Fair play to him for battling on and never giving in.

"He was fantastic and that's why he's 15-times world champion."

Hamilton, the third Stoke-on-Trent player in the field, leads the Premier League table after victory on his debut.

The 44-year-old, who was runner-up to Lewis at the PDC world championships in January, averaged almost 99 in his victory against Wade.

"People were probably writing me off before the game," said Hamilton. "Hopefully I can push on from here and carry on playing as I am doing.

"I'm enjoying every single minute of it. I want to show everyone what I can do.

"To beat James is a great achievement for me. He's a great player and to beat him is a feather in my cap.

"There's no reason why I can't go on now and beat the rest of them as well."

The eight players meet each other twice during the group stage, with the top four going through to the play-offs on 17 May.