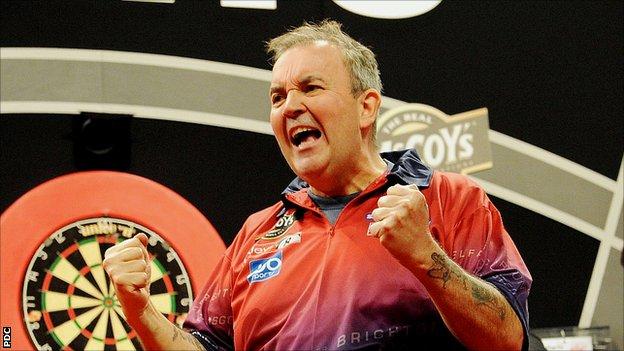 Taylor crushed Anderson 8-1 to maintain his unbeaten start to the Premier League season.

The world number one swept to a fourth victory of the season, moving him three points clear at the top of the Premier League table.

Taylor said: "I'm very pleased with that, I took my chances and it's a good night's work."

The world number one followed up last week's Premier League record average of 117.35 with another terrific display.

The capacity crowd at the Brighton Centre also saw Kevin Painter come from 4-2 down to win his third game of the season with an 8-5 defeat of Andy Hamilton.

Defending world champion Adrian Lewis is still searching for his first win of the Premier League season after being beaten 8-4 by Simon Whitlock.

But 2009 champion James Wade picked up his second successive victory, defeating Raymond van Barneveld 8-6 after the Dutchman fought back from 6-1 down to force a deciding leg.