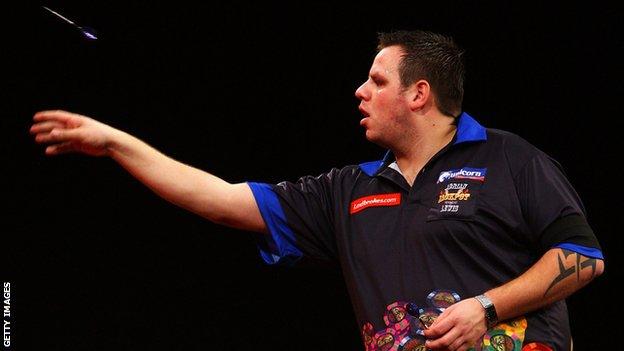 Adrian Lewis inflicted Phil Taylor's first defeat of the Premier League Darts season as he came from behind to win 8-5 in Bournemouth.

Reigning PDC world champion Lewis came from 4-1 down with the help of a 160 checkout to end Taylor's nine-game winning run in style.

"I've got to treat every game like a final now, starting with Gary Anderson in Liverpool next week."

Lewis had been the only player to pick up a point against 15-times world champion Taylor this season after the pair fought out a 7-7 draw in Manchester two months ago.

And the victory lifted Lewis to fourth in the Premier League Darts table above Raymond van Barneveld, after the Dutchman suffered an 8-5 defeat by to Simon Whitlock.

Stoke's Andy Hamilton, meanwhile, battled to a second successive draw as he denied former champion James Wade a vital victory in their match.

"I think I played well but a draw was a fair result.

"I've battled for points all the way through the season and I never gave in again," said Hamilton.