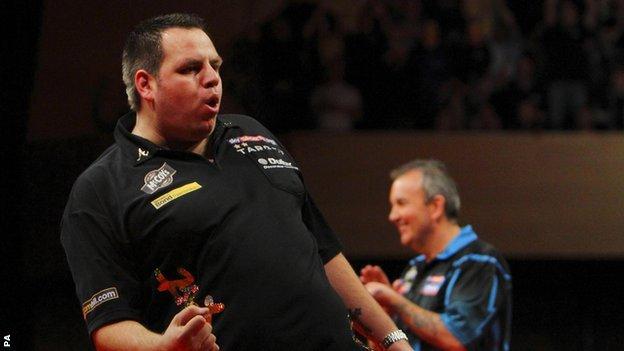 Double world champion Adrian Lewis is still on course to reach the Premier League play-offs in May.

Lewis told BBC Radio Stoke: "Gary was back to his best tonight and I am happy with the point.

Anderson is the reigning Premier League champion and the point has kept alive his slim hopes of qualifying for the semi-finals.

The Scot entered the season's 12th league night bottom of the table and had to avoid defeat to retain any chance of finishing in the top four.

Andy Hamilton, meanwhile, is still in the race for a play-off spot in his first Premier League season with a 7-7 draw against Raymond van Barneveld.

Hamilton took a 3-0 lead and also led 4-1, before the Dutchman hit back to share the spoils.

After losing to Lewis in his previous outing, Premier League leader Phil Taylor returned to winning ways with an 8-3 defeat of Simon Whitlock in Liverpool.

Taylor, who is the only player to have guaranteed a play-off place, is now seven points clear at the top of the table.

Kevin Painter drew 7-7 with James Wade in the night's other match.