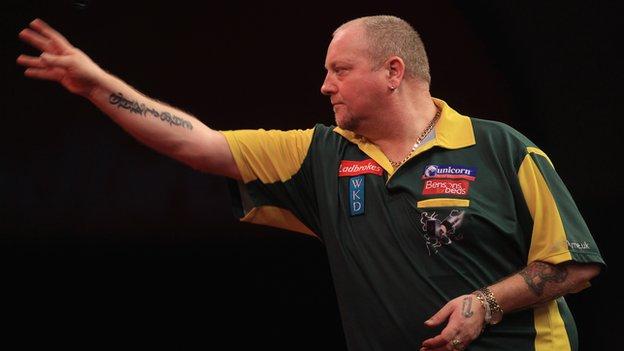 Stoke's Andy Hamilton kept alive his Premier League Darts play-off hopes with an 8-4 win over Simon Whitlock at the NIA in Birmingham.

Hamilton had to avoid defeat in the contest to retain any hope of a top-four finish, and obliged with a superb 8-4 win.

"I knew that if I lost I'd have been out of the Premier League, and I'm still there fighting," he said.

Hamilton has to beat Kevin Painter next week, and then rely on other results.

World champion Adrian Lewis moved up above James Wade in the league table despite his 8-3 defeat to Kevin Painter.

Lewis admitted: "It was a bad day at the office. I wasn't at the races but Kevin took out pretty much every chance he had and deserved to win.

"I've got Simon Whitlock next week, and it's game on now. It's been the best Premier League ever and if I don't qualify it will be down to me really."

Phil Taylor stormed to an 8-1 win over James Wade - and left the 2009 champion facing a shoot-out with Raymond van Barneveld for a play-off place.

The world number one was back to his best as he averaged an outstanding 116.10 in seeing off Wade, having been on course for a first-ever televised average of above 120 after winning the opening six legs without reply.

The final round of matches take place on Thursday, 10 May at the Metro Arena in Newcastle.