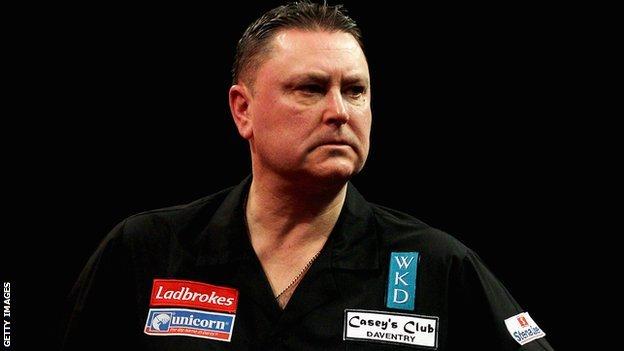 Daventry darts player and Players Championship winner Kevin Painter says he hopes he will get another chance to play in the Premier League.

Painter beat World Champion Adrian Lewis 8-3 in the penultimate round of this year's competition, and could still qualify for the play-offs.

Painter told BBC Northampton: "It's been a great experience, whatever happens next week.

"Playing top-class players can only be good for me. I'd love another go."

"But there's so many good players and you don't know if you're going to get picked as one of the eight or not," added Painter.

The Artist, as Painter is known, plays Hamilton, who can also potentially finish in the top four, at the Metro Radio Arena in Newcastle on 10 May.

"Only the top two are definitely through [to the semi-finals].

"Next week is going to be massive. The Premier League has never seen this before - normally it's all done and dusted. It makes for a cracking night."

Painter was wild-card entry into the tournament, and has beaten Lewis, Simon Whitlock, Andy Hamilton, and Gary Anderson twice in his debut year.

"It's just a pity that I threw away silly points early on and, last week, I had two darts to beat Wade 8-4. If I'd done that, I'd be sitting third now.

"My finishing has been pretty good throughout the Premier League.

"I've got 16 ton-plus finishes, which is more than anybody.

"I think that's what has won me the games I have won. I can play a lot better, and I should be scoring better, but the big finishes make the difference in big matches."