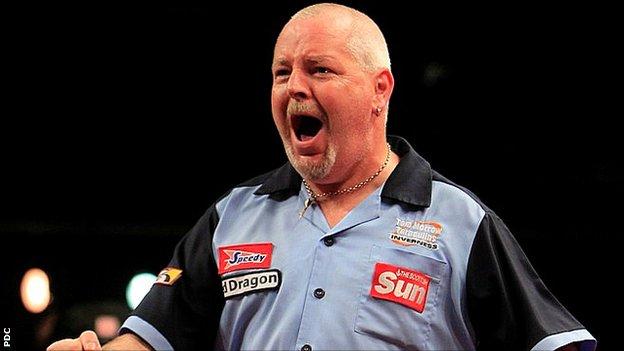 Thornton trailed 2-0 in the final, but won 11 of the next 14 legs to seal his first major PDC title.

The 2007 World Masters champion said: "It hasn't sunk in what I've done. To beat Phil Taylor in a televised final is a very special moment in my career.

"Phil did miss quite a few doubles in the middle of the game. I managed to take the chances that were on offer."

Thornton, 44, had earlier beaten former Lakeside finalist Dave Chisnall in the semi-final and will move back into the world's top 32 with his victory at the Reebok Stadium.

Taylor, who lost a major televised final for only the sixth time in his career, said: "Robert deserved to win. I missed a lot of doubles but Robert was the better player.

"He's come through an incredibly tough draw and beaten the likes of Mark Webster, Gary Anderson and Wes Newton along the way to the final, so that shows he deserves this title."