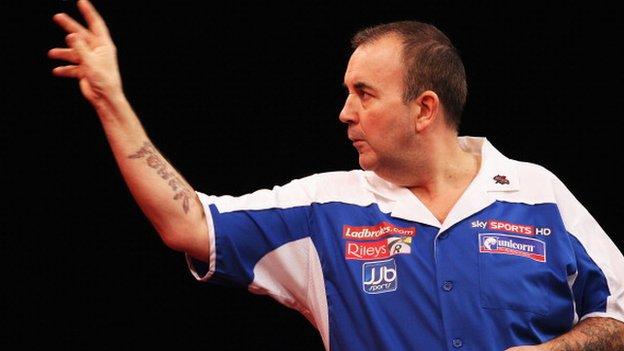 It was the fourth time since 2006 that the two men had faced each other in the final, Taylor emerging victorious on every occasion.

Taylor began the best of 35 legs contest with a maximum to immediately break Wade's throw, but the 2007 champion broke straight back to share the first 12 legs.

Taylor made the first decisive move of the match to lead 10-7 only for Wade to claw his way back to 10-10.

'The Power' again opened up a healthy advantage at 14-10 and 15-11 but Wade hit the first three figure check-out of the contest to reduce the deficit to 15-12 before checking out with 114 in the next leg after Taylor surprisingly turned down a finish on the bull.

At 15-14, Wade was the width of the wire away from levelling with a 140 finish, but the 15 times world champion and reigning Premier League champion stepped in to take a 16-14 lead before going on to seal title number 13 in style with a 13 dart leg.