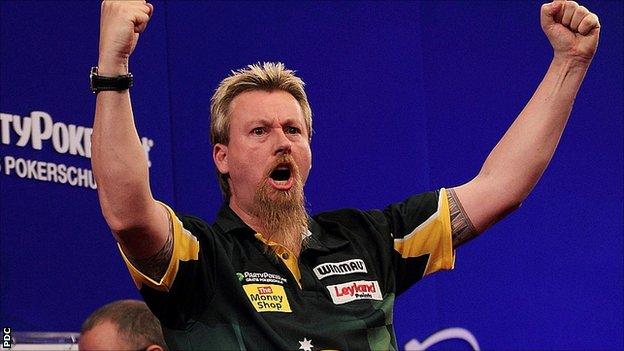 Simon Whitlock defeated Wes Newton to win the European Championship and claim his first major title in the PDC.

The 43-year-old Australian, a beaten finalist in previous PDC and BDO World Championships, prevailed 11-5 in the final in Muelheim, Germany.

"I've been so close to winning a major in the last couple of years and I'm absolutely ecstatic to finally win one," said Whitlock.

Whitlock lost the 2010 PDC World Championship final to Phil Taylor, two years after losing in the final of the BDO version to Mark Webster

"This a dream finally coming true and I'm so proud of what I've done."

The win puts Whitlock up to fifth in the PDC Order of Merit, above Newton, who suffered defeat in his second major final after being the runner-up at the 2011 UK Open.

"It's been a good weekend and although I'm disappointed to lose the final, I'll take the positives out of it," said Newton, from Fleetwood.

"It hurts to lose in the final because you're so close, but on the other hand it's another final and I'm taking steps in the right direction. Hopefully one day I'll win one."

Phil Taylor, who had never previously lost a match in four appearances at the European Championships, was knocked out at the quarter-final stage by Northern Ireland's Brendan Dolan.