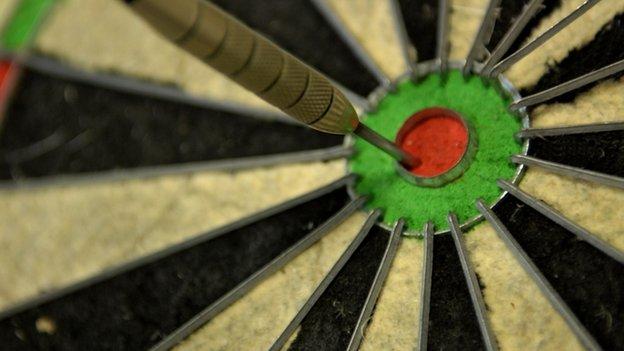 The Jersey Festival of Darts could become an annual event once again, promoter Howard Miller has suggested.

The tournament used to attract players such as Phil Taylor and Eric Bristow but came to an end in 2001.

Cleveland's Glen Durrant beat James Wilson 4-1 in the final of the resurrected tournament on Saturday.

It was always one of the most eagerly-anticipated events

"The old festival ran for about 16 years and, if everything goes according to schedule, the chances are we'll do it for the next 16 years," said Miller.

The 2012 event was held as a four-day festival at the island's Merton Hotel, featuring four BDO ranking events.

"Next year we're expecting a bumper crowd, this year let's get it back on the map," Miller told BBC Radio Jersey.

"It was always one of the most eagerly-anticipated events of the year."

The 2012 Jersey Open and the Jersey Classic, both with men's and women's sections, were the ranking events at the revived festival, but there were also competitions for players from the island to test themselves.

"Unfortunately [this year] it clashed with a big event in Belgium," Miller said.

"Hopefully next year it won't do and the numbers that attend next year will go up accordingly.

"Next year there will be probably 20 of the best players in the world here, whereas this year there's probably eight."