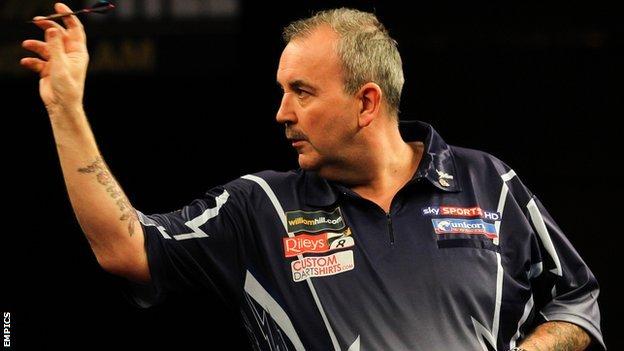 Phil Taylor will go in pursuit of a 16th world darts title next week on the back of a £60,000 payday for his third tournament victory of the year.

Stoke's 15-time PDC world champion produced some of his best darts this year to beat Belgium's Kim Huybrechts 13-6 in Sunday's final of the Players Championship at Butlins, Minehead.

Taylor, 52, was winning the Players' title for the third time in five years.

It followed his victories in the Premier League and the World Matchplay.

Taylor had to get through three matches on Sunday to claim the 69th title of his career.

After coming from 9-5 down to beat Andy Hamilton 10-9 in the quarter-final, he then saw off Aussie Simon Whitlock 11-2 in the semis before pulling away at 6-6 in the final to win the next seven legs.

Kim Huybrechts has got a huge future in the game. Whoever plays him in the world championship will be scared of him now

"It's a really tough day, " said Taylor. "To win three matches and take the title is a big challenge, so I'm chuffed to bits to have won.

"It's been an unbelievable day to be honest.

"Winning against Andy Hamilton was probably my greatest escape, then Kim came into the final full of confidence.

"I wanted to keep putting him under pressure and making him think and eventually I got on top of him.

"But he's got a huge future in the game and whoever plays him in the world championship will be scared of him now. He'll be in loads more finals."

Taylor will return to the Alexandra Stadium looking to improve on last year's early second round exit when he failed to make the PDC World Championship quarter-finals for the first time in his career, going down 4-1 to Dave Chisnall.

Local entrant Justin Pipe, from Taunton, went out at the semi-final stage at Minehead, losing 11-6 to Huybrechts.

The Belgian landed an astonishing 11 out of 22 attempts at a double to end Pipe's best-ever run at a major tournament.

"It may have been different if I'd taken the first couple of legs, but it's another learning curve for me.

"It's my first TV semi-final and I'm up to ninth in the world, so I'm really happy."