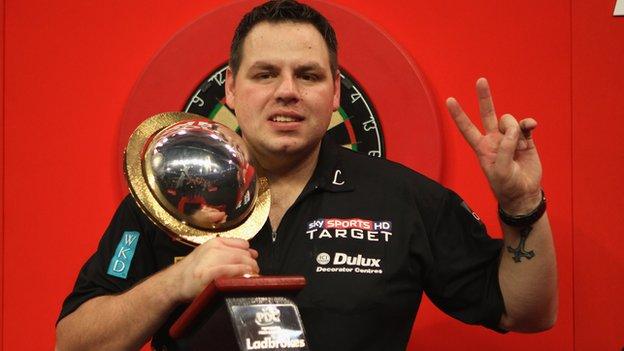 Adrian Lewis will be bidding to win a third consecutive PDC World Darts Championship when he begins his defence at London's Alexandra Palace on Friday 14 December.

However he will have to come through a field that includes 15-time world champion Phil Taylor and man-of-the-moment Michael van Gerwen,

Here, with expert analysis from former two-time BDO World Championship semi-finalist Chris Mason, we profile some of the contenders.

World Championship pedigree: Unmatched - he's a 15-time world champion, including 13 PDC crowns. For the third time in his career, Taylor has gone two years without winning the world title, he's never had to wait a third year.

Year to date: By anyone else's standards, superb; by Taylor's mixed. But while he didn't dominate the majors in 2012 of the last 25 tournaments he has entered he has won 14 and reached a further five finals. He remains favourite for a reason.

Chris Mason's verdict: Up until recently he only held two of the major trophies, so it's been a lean couple of years for him. Winning the Players' Championship will have been a major boost.

Even recently though he's lost two finals on the Pro Tour and wasn't convincing against Andy Hamilton in the Players' Championship.

He's just ahead of Michael van Gerwen but he's not an odds-on favourite any more, he can't just turn up and roll over everyone. The field is very strong: it's probably the best we've seen.

As the tournament progresses, Phil gets stronger, he wins close sets as others find it hard to close them out, he's the master under pressure.

Year to date: Whitlock won the European Championship in September to land a first PDC major, while 2012 also saw him reach the Premier League final and he reached the last four of the Players Championship Finals. Has been second only to Van Gerwen in the second half of 2012.

Chris's verdict: It's his format and he tends to excel but he's in the second quarter of the draw with Dave Chisnall. After that, it's either Raymond van Barneveld or Gary Anderson so he's got a tough run. However, I wouldn't be surprised if he made the final as he always does well. 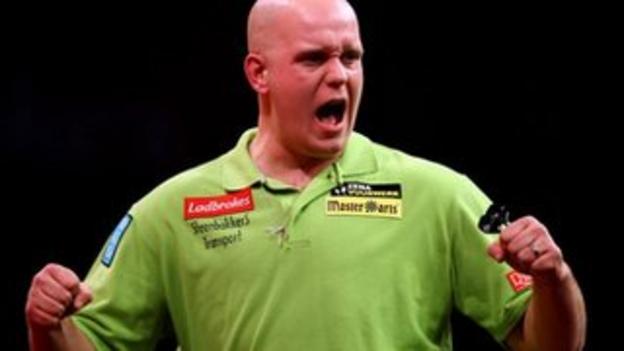 World Championship pedigree: Little to speak of - his run to the last 16 last year was his best performance to date.

Year to date: 2012 will go down as the year Van Gerwen came of age. He won the World Grand Prix in September, then reached the Grand Slam of Darts final after a run that included a brilliant 10-5 win against Taylor. Van Gerwen has won eight PDC ranking events in 2012, more even than Taylor.

Chris's verdict: Michael's been amazing this year but he's got to deal with the expectations all over again. As a kid he arrived in the PDC with huge expectations and couldn't deliver, now it will be interesting to see how he copes this time.

He could fold under the pressure. He won the Grand Prix but that was a game where the crowd played far too much of a role in upsetting his opponent Mervyn King.

Michael is going to be a great player but his problem is that he just wants to play his own game. Others will try to slow him up and play little mind games. Michael's second favourite but at those odds I wouldn't be putting my money on him.

He might scrape into the last 16 but that's about it

World Championship pedigree: A quarter-finalist last year - and that's it. Huybrechts has only made one world championship appearance in his career in either code having previously tried - and failed - to qualify for the BDO version on several occasions.

Year to date: Huybrecht's run to the last eight was a surprise to most last year but his form since suggests a repeat is far from unlikely. A regular in the latter stages of tournaments in 2012, he reached the European Championship semi-final in September before making it all the way to the Players Championship final.

Chris's verdict: Kim's father sadly died very recently and you don't know how that will affect him - there have been cases of players being inspired by a death. He's in a good section of the draw and a few players in that fourth quarter like Wes Newton, King and Dean Winstanley will be fancying their chances of going on a run. But the Players' Championship was a real breakthrough for him and there's no doubt he's going to be a top player.

World Championship pedigree: Superb, Lewis was a surprise winner in 2011 then followed it up by retaining the title last year. He has never won any of the other majors, suggesting he only comes fully to life in Ally Pally.

Year to date: Since winning the World Championship and Darts World Cup with Taylor a month later, Lewis hasn't gone past the quarter-finals of any major event and is only 16th in the rankings since mid January.

Chris's verdict: The money's better than ever in darts but you've got the chance to cash in with exhibitions when you're world champion. I think Adrian's being doing that and his matchplay has suffered. I don't fancy his chances as he's in a tough section of the draw and could play Max Hopp in the second round, which will be difficult and then Ronnie Baxter or Kevin Painter and Van Gerwen if he gets through that.

World Championship pedigree: Not befitting his overall record - the seven-time major winner has only made two semi-finals. In 2012 he should have gone at least one step further, losing 6-5 to Lewis having led 5-1 in their semi-final.

Year to date: Poor, especially the second half. Wade made the World Matchplay final in July but amid a break to cope with depression has failed to progress past the last 16 of any tournament since mid-September.

Chris's verdict: I can't see a lot for him - James hasn't been playing anything like his best for a long time, even before he suffered a meltdown against Colin Osborne in the Grand Prix. Peter Hudson in the first round is no mug so, while it would be a surprise if James lost that, it wouldn't be a great shock. Get through that and he'll probably face Steve Beaton. He might scrape into the last 16 but that's about it.

World Championship pedigree: Second only to Taylor, Barney is a five-time world champion including the 2007 PDC crown. He also made the final in 2009 but was a first-round loser in 2012, going down 3-0 to James Richardson in one of the sport's great shocks.

Year to date: Winning the Grand Slam rescued a mediocre season by his standards. However even that success was followed by a first-round exit in the Players' Championship.

Chris's verdict: Until the Grand Slam it has been nearly five years since Barney had won a major. He's got a tough first-round match against Michael Smith; a good young player who's won a Pro Tour event this year. You'd fancy Barney to get through but he's likely to face Gary Anderson in the last 16 and then Whitlock and Taylor.

World Championship pedigree: One PDC final, one BDO semi-final - not terrible but not a record befitting Anderson's quality.

Year to date: No real form to speak of, going back into 2011 Anderson has not won any of the last 38 ranking events he's entered. If you draw up a rankings list since the 2012 World Championship he's 22nd.

Chris's verdict: I'm a huge Gary Anderson fan and if he's on his game, he will be very dangerous. I spoke to him after the Players' Championship and he was very annoyed, saying he was going to go away and put in a lot of hard practice. As with Barney, it's going to incredibly hard for either of them to come through the top half of the draw, you just cannot afford one poor performance.

A few names to watch

"Sixteen-year-old Max Hopp is the youngest player ever to make the World Championship and has a big future in the game," says Mason. "He could be a really tough opponent for Lewis in the second round.

"At the other end of the scale, 62-year-old Dennis Priestley doesn't play every event, which is why his ranking has slipped but he's been in great form of late, reaching a Pro Tour final and beating Van Gerwen. His first-round match against Ronnie Baxter is the pick of the round and they're in a section where they could go on a run.

"Andy Hamilton reached the final last year and should have beaten Taylor in the Players' Championship. But you've got to think that was his best chance to win a TV title. Robert Thornton won the UK Open, beating Taylor in the final, but that was a strange match and Taylor was affected by the person running on to the stage. I'd fancy Phil to win if they met in the worlds.

"You've also got to look at Wes Newton, who's due a good major. I think Taylor, Whitlock and Van Gerwen will make the last four - but it's that bottom section that's the one to watch - Wes could make it through."