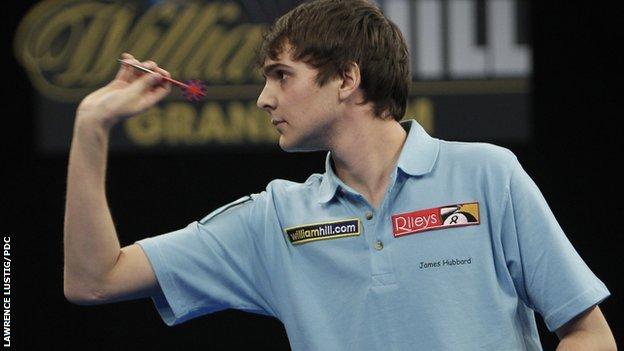 The 20-year-old will take on 25th seed Richie Burnett in the first round at Alexandra Palace on Saturday afternoon.

"Mervyn's brilliant to practice with because he knows everything really," Hubbard told BBC Radio Norfolk.

"I think he's the fifth most successful darts player in history, so it's pretty handy to have him on the doorstep."

He added: "I'm learning every day from him and I couldn't think of anyone better to practice with."

Hubbard won the World Youth title in 2011, but is still adjusting to the step-up to professional level.

"It's a slow process. Michael van Gerwen, who's now one of the best players in the world, won the World Masters, which was a major in the BDO [British Darts Organisation] system, when he was 16, but then failed to do anything for about five years," he said.

"It's not going to happen just overnight, so these tournaments on TV, I'm not really going into them with pressure, I'm going into them to gain experience and do as well as I can."

Hubbard has lost both previous matches against Welshman Burnett, who won the rival BDO world title in 1995.

But, after failing to win any of his group matches at last month's Grand Slam of Darts in Wolverhampton, he believes he is in much better form heading into the World Championship, which gets under way on Saturday.

"I had a couple of months where I wasn't playing very well, so the Grand Slam fell at a bad time really," the world number 58 added.

"I went into that tournament hoping to put up a good performance and come out of it with a bit of confidence and I managed to do that, even though I lost all three games.

"I've been playing well recently in practice so I'm going into the World Championship a lot more confident and hoping to get a win."

Hubbard's section of the draw also includes 15-times champion Phil Taylor, while 14th seed King, a semi-finalist in 2009, is at the opposite end and starts his challenge against Dean Winstanley next Tuesday.