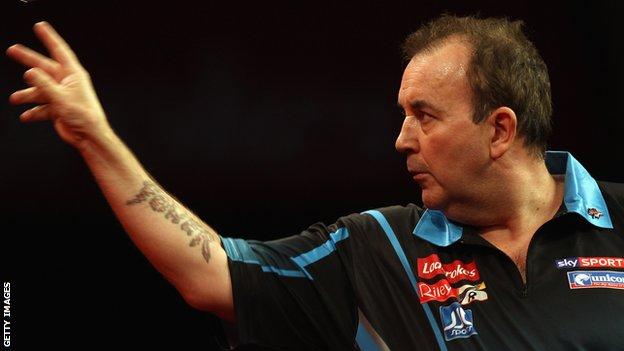 Phil Taylor progressed to the second round of the PDC World Championship with a straightforward win over Northern Irishman Michael Mansell.

But despite the 15-time world champion rarely being troubled as he completed a 3-0 victory, he did not look entirely comfortable, scoring an average of 93.

Taylor will face Jerry Hendriks in the last 32 after the Dutchman produced the most memorable win of the day.

Hendriks will take heart from Taylor's mixed performance at the oche, particularly since Mansell rarely pressurised "The Power" over the course of the three sets.

It would not have been the start Taylor was hoping for after last year's performance, when he was knocked out in the second round by Dave Chisnall.

Taylor, 52, will be joined in the last 32 by another former world champion, John Part, who overcame Joe Cullen in straight sets.

Number nine seed Terry Jenkins is also through with a straight-sets win over Steve Brown, while Richie Burnett survived a scare against PDC world youth champion James Hubbard, throwing away a two-set lead before finally advancing 3-2.

World champion Adrian Lewis is already into the second round after Friday's 3-1 win over Gino Vos.