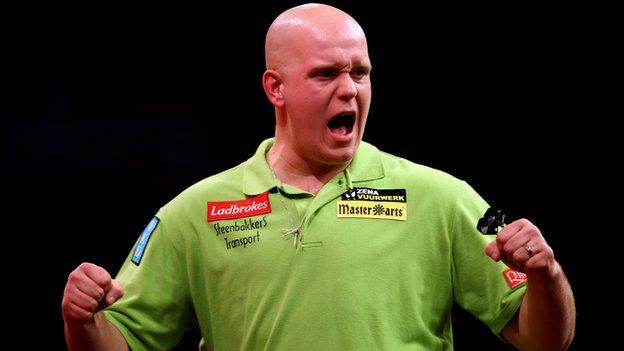 Dutchman Michael van Gerwen has beaten Singapore's Paul Lim 3-0 in the first round of the PDC Darts World Championships.

Van Gerwen is one of the favourites for the tournament after his World Grand Prix win in October.

He said: "I'm not overly impressed with my performance but I won in straight sets, so that's a good feeling."

Van Gerwen was given a tough test by Lim, who had defeated Mohd Latif Sapup in the preliminary round earlier in the night.

The Dutchman will now face Peter Wright in the second round.

37-year-old Van der Voort, a quarter-finalist in 2010, raced to a 2-0 lead against Manchester's Kellett.

The English debutant produced an 11-darter in the third leg, but 19th-seed Van der Voort was able to close out the match 3-0.

Rand came from a set down to claim a 3-2 victory against Belgian Huybrechts.

In the first match of the evening, Mark Walsh beat Darren Webster 3-1.