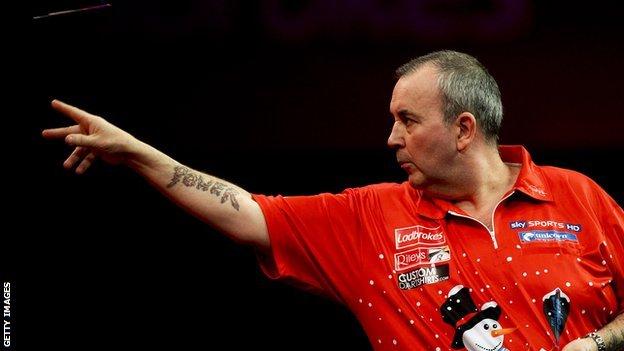 Phil Taylor did not produce his best but was still able to beat Jerry Hendriks and move into the last 16 of the PDC World Championship.

The 15-time world champion lost the first set to the Dutchman before eventually progressing 4-1.

"I'm happy with 4-1, but not happy with my performance," said Taylor. "The more Jerry struggled, the more I struggled."

Taylor goes on to face Scotland's Robert Thornton, who defeated Paul Nicholson in a sudden-death decider.

Thornton had four darts to claim a 4-2 victory, but Nicholson fought back to force a deciding set, which went to a final and decisive 11th leg.

Another Scot needing a deciding set was fourth seed Gary Anderson, who had to come behind to beat qualifier John Bowles.

Bowles missed three attempts at double top for a shock win, before Anderson clawed back to take victory in the 10th leg of the final set.

Elsewhere, Andy Hamilton, Dave Chisnall and Terry Jenkins all booked spots in the third round with 4-1 wins over Richie Burnett, Daryl Gurney and John Part respectively.