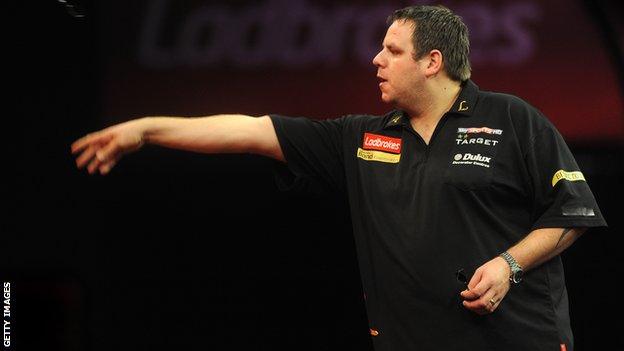 Adrian Lewis moved into the last 16 of the PDC Darts World Championship with a 4-1 win over Denis Ovens.

The defending champion is looking for a third successive world title and will face Kevin Painter in the next round.

"I found it a real struggle out there, but I got the job done," Lewis said.

Despite progressing to the third round at Alexandra Palace, 27-year-old Lewis, from Stoke, was unhappy with his performance.

He said: "I know that I have to improve and I will get back on the practice board over Christmas, ahead of my game against Kevin.

"I know that if I play like I did tonight then I will be out."

Australian Whitlock progressed to the last 16 with a straight-sets victory over Osborne.

The 37-year-old Englishman managed just four legs in the contest as Whitlock put in a strong performance, including a 164 checkout.

Whitlock said: "I've put in a great deal of practice in preparation for this tournament and I'm very happy with the way things have been going at the moment."

Elsewhere, Wes Newton sealed a one-sided 4-0 win over Scott Rand and Colin Lloyd defeated Mark Webster 4-2 to seal his place in the last 16.