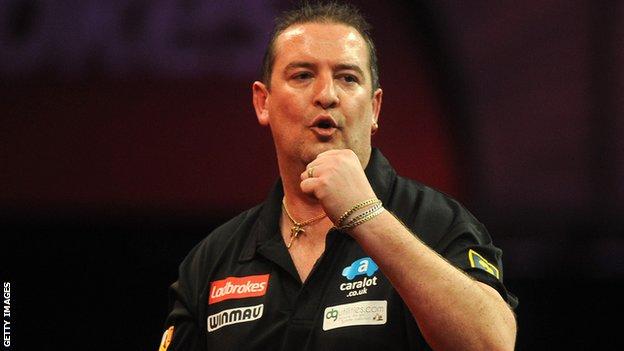 Dean Winstanley became only the third man to hit a nine-dart finish in PDC World Championship history in his second-round defeat to Vincent van der Voort.

The Englishman, 31, achieved perfection in the third leg of the third set.

Only Raymond van Barneveld - twice - and Adrian Lewis have thrown nine-darters at the tournament before.

Despite the nine-dart finish, the man from Rotherham lost the match 4-2 to Van der Voort.

Winstanley was trailing by two sets to nil to the 37-year-old Dutchman, before his nine-darter sparked a comeback which saw him level at 2-2.

His comeback ended there though as Van der Voort took the next two sets to complete a 4-2 victory.

Winstanley had the chance to force a deciding set but hit 20 instead of single one and Van der Voort took out double eight to seal the win.

The nine-dart finish will earn Winstanley a £15,000 bonus if no other player repeats the feat during the tournament to share the prize.

Phil Taylor eased through to the quarter-finals, seeing off Robert Thornton 4-0.

Taylor was rarely troubled, checking out on 131 in the opener and then taking advantage of his opponent missing three throws at double top to take the second set.

He got out of trouble in the third, taking a leg against the throw with a stunning 121, and the fourth duly followed as Thornton missed his ninth double of the night.

The 15-time world champion will meet Andy Hamilton in the last eight, after the number eight seed defeat Terry Jenkins 4-1.

Earlier in the afternoon, Mark Walsh overcame Justin Pipe 4-2 to reach the last 16, where he will meet Wes Newton.

Number three seed James Wade and World Grand Prix champion Michael van Gerwen are also through to the third round after wins over Steve Beaton and Peter Wright respectively.