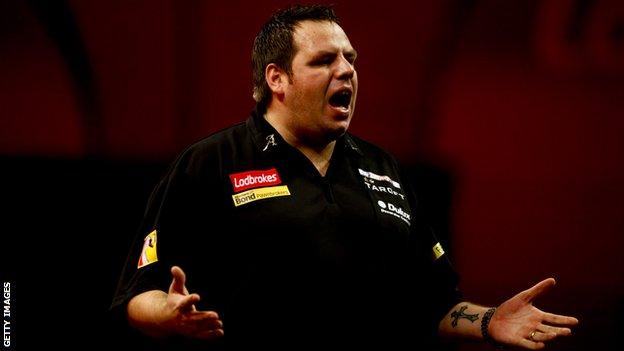 Reigning champion Adrian Lewis moved into the last eight of the PDC Darts World Championship with a 4-2 win over fellow Englishman Kevin Painter.

Lewis, looking for a third successive world title, led 2-0 before Painter came back to level.

But Lewis held his nerve to book a quarter-final tie with Michael van Gerwen, a 4-1 winner over Colin Lloyd.

"I'm very pleased to win the match as Kevin has been in better form than me coming into this match", Lewis said.

"We are now in to the business of the tournament and I have proved over the last two years that I know how to get the job done.

"I'm really looking forward to playing Michael in the next round. He has had an incredible year with his win in the World Grand Prix, and is probably a world champion in waiting."

The Dutchman limped throughout his contest with Lloyd after an initial injury to his right foot was exacerbated by a Achilles problem on his left.

He said: "I'm so happy to reach the quarter-finals of the World Championships for the first time.

"I never expected to play as well as I did, considering I am suffering quite a lot of discomfort in my left foot. I feel that this win is a big step for me in trying to win my first World Championship."

Australian Whitlock moved into the quarter-finals with a seven-set win over Dave Chisnall.

Whitlock, the 2010 runner-up and a semi-finalist 12 months ago, produced a key 152 finish to save the game when Chisnall took a 3-2 lead in the deciding set.

The Australian then won the next two legs to edge the victory, setting up a quarter-final against five-time world champion Van Barneveld, a 4-0 winner over Scotland's 2011 runner-up Gary Anderson.

Wade will now meet Newton, a 4-1 winner over Mark Walsh.

Phil Taylor, the 15-time world champion, reached the quarter-finals before the break for Christmas with a 4-0 win over Robert Thornton and faces Andy Hamilton.