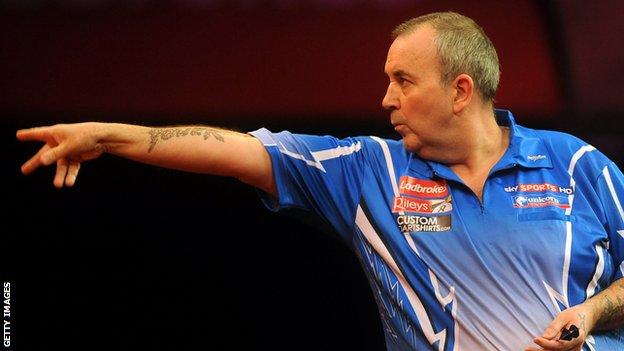 Phil Taylor coasted past Andy Hamilton to set up a mouth-watering semi-final meeting with Raymond van Barneveld at the PDC World Championship.

The 15-time world champion beat Hamilton 5-0 with his opponent only managing to win two legs in the match.

Van Barneveld saw off Simon Whitlock 5-1 to book his place in the last four.

Defending champion Adrian Lewis faces Michael van Gerwen and Wes Newton goes up against James Wade in the two other quarter-finals on Saturday.

Taylor played some of his best darts of this year's championship at London's Alexandra Palace as he took the first two sets without dropping a leg.

However, Hamilton will rue four missed doubles in those six legs that would have got him on the board.

With a two-set advantage, Taylor never looked back and finished off the 5-0 rout with a 65 checkout.

In the earlier semi-final, Van Barneveld raced into a 2-0 lead before Australian Whitlock responded.

However, the Dutchman regained control and a stunning 11-darter in the penultimate leg of the sixth set helped him to a dominant win.