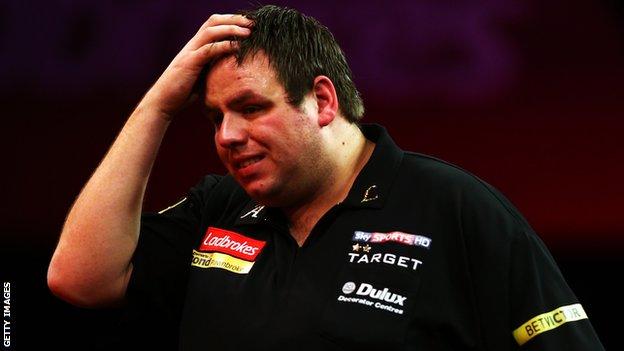 Defending champion Adrian Lewis is out of the PDC World Championship after a 5-4 defeat by Dutchman Michael van Gerwen.

Stoke's Lewis missed two darts to win the match at 2-1 in the deciding set, before Van Gerwen went on to seal the match with a double-four.

The 23-year-old reaches the semis at Alexandra Palace for the first time.

He will face James Wade, 29, after he beat Fleetwood's Wes Newton 5-4.

Van Gerwen led the match four times and brought a champion's performance out of Lewis, who levelled each time to take the match into a decider at 4-4.

But after missing the chance to take the match, two-time champion Lewis was beaten as 'The Green Machine' checked out on 103 and 108 to lead the final set 3-2.

With the deciding set needing to be won by two clear legs, Van Gerwen remained calm to put the 27-year-old champion out.

In the other quarter-final, Englishman Wade led 4-2 before a fightback from Newton levelled the match at four sets all.

But the world number three Wade prevailed 3-1 in the deciding set to advance to the semi-finals for the third time.

In the other semi-final, 15-time world champion of the Netherlands.