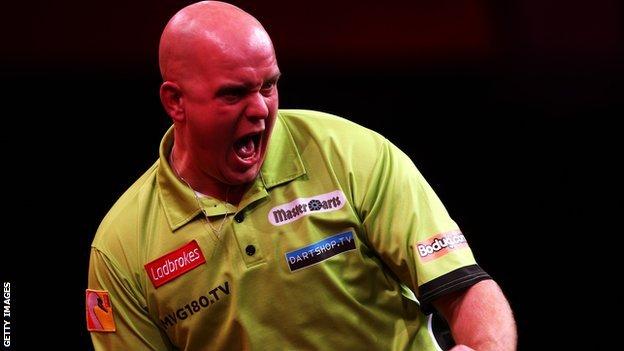 Van Gerwen is the second man to achieve perfection in the 2013 tournament after Dean Winstanley hit a nine-darter against Vincent van der Voort.

He will meet 15-time world champion Phil Taylor in the final.

World number one Taylor survived a Raymond van Barneveld fightback to earn a 6-4 victory in the second last-four clash.

Van Barneveld - twice - and Adrian Lewis are the only players to have thrown perfect legs in the PDC World Championship.

But Van Gerwen went close to creating his own piece of history when he missed out on becoming the first man to hit successive nine-darters.

The number seven seed had only just finished celebrating his third televised nine-dart leg when he hit a further eight accurate arrows.

However, unlike the previous stanza, Van Gerwen just fell inside the double 12.

"I have never done it in practice [successive nine-darters]. I was close but I didn't do it," said Van Gerwen.

"I was very concentrated. I thought to myself 'carry on' because I was 2-1 down. I still lost that set but it is not about nine-darters, it is about winning games and I am happy with myself for getting into the final."

Like his quarter-final victory over 2011 and 2012 champion Lewis, Van Gerwen outscored Wade, but the number three seed refused to lie down.

Indeed, even after Van Gerwen threw the nine-darter, Wade was still able to win the fifth set as he fought back from 3-1 down to level at 3-3.

Doubles were often Van Gerwen's undoing - the missed 11 in the second leg of the match - but such was his superior scoring over Wade, who did not hit a maximum 180 until the eighth set, the left-hander was always up against it.

And so it proved, with Van Gerwen breaking Wade's throw in the seventh set to regain a lead he would not relinquish.

He closed out victory in the 10th set to reach his first World Championship final, finishing with a match average of 97.87, more than 10 points better than Wade, who was defeated in a third world semi.