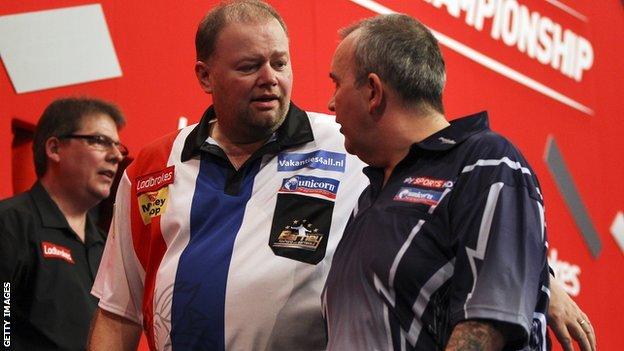 The 15-time world champion broke the throw of the Dutchman in the first leg of the match and stormed to a 5-1 lead.

Two missed match darts at double 20 in the seventh set knocked Taylor off course, with Van Barneveld reducing the deficit to 5-4 at the Alexandra Palace.

But Taylor finally closed out a 6-4 victory to book a final meeting with Michael van Gerwen.

Taylor's winning dart at double 16 sparked an altercation between the two players, when after an initial handshake, the man from Stoke-on-Trent refused Van Barneveld's extended congratulations.

That may have been a result of Van Barneveld's pre-match comments, when the five-time world champion said he did not fear Taylor, who responded by saying that he would make the 13th seed afraid.

And, Van Barneveld was subdued in the early stages, shaking his head as Taylor ruled the oche, with the world number one not losing a leg until the sixth of the match.

Van Barneveld held his throw to take the third set but a further break from Taylor gave him a 5-1 lead and moved 'The Power' to the brink of a first world final since 2010, but the missed match darts in the seventh set marked a change in momentum.

With Van Barneveld breaking the Taylor throw in the eighth set and holding his own in the ninth - with the aid of a 125 finish that included two bullseyes - the gap was down to one.

However, with the advantage of the darts, Taylor was able to cling on to reach a 19th world championship final.

Taylor was reluctant to discuss his clash with Van Barneveld at the end of the match. "Nothing was going on," he told Sky Sports. "There is nobody in this room who is a bigger Barney fan than me. It is forgotten now."

Taylor said his performance had been affected by a heavy cold. "I am shattered. I have got a day off tomorrow and am just going to lie in bed and try and restore my energy levels."

"I cannot play like I have tonight against Michael. He is phenomenal and I have not got to miss and play my own game."

Taylor said if he wins the final he would give the new Sid Waddell Trophy, renamed this year in memory of the legendary commentator, to Waddell's wife.